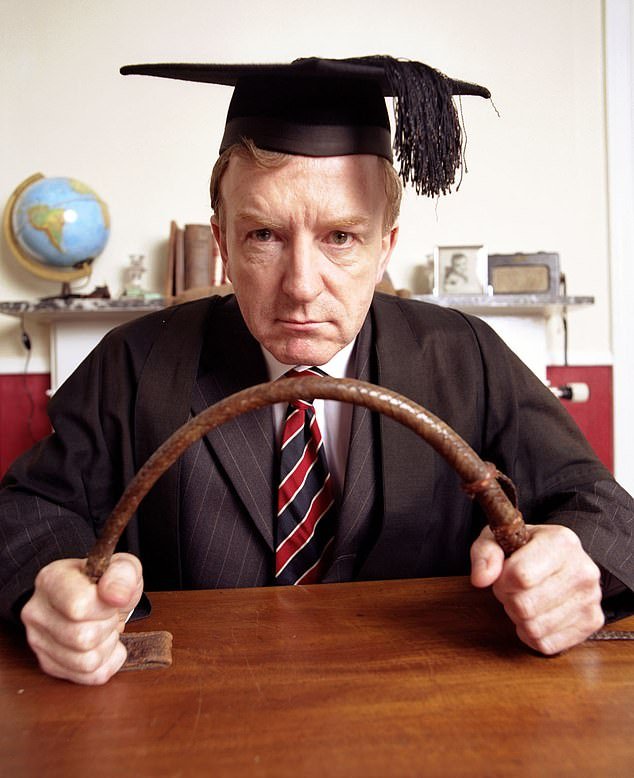 BBC broadcaster Simon Warr’s death yesterday has brought out on social media old wound memories from former pupils where Warr was a teacher, many who are glad to hear of his passing relieved old memories on social media pages related to the Royal Hospital School old boys groups with one feeling it will be like Jimmy Savile and the truth will come out now he’s dead. 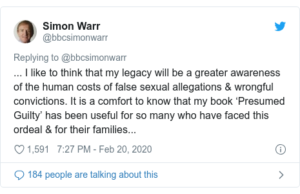 Warr himself made his last social media posts on Thursday from a hospice claiming that his legacy would hopefully be remembered for a greater awareness of the human costs of false sexual allegations and wrongful convictions but former pupils disagree.

Andy Cmt Harper posted:  ” The law is perfect as you know, he was a sadistic despot and although the law of man failed to deliver justice to his many victims I am for one am delighted that the justice of nature has finally got him”

Mark Vine wrote: ” Maybe that was a miscarriage of justice then? Just because he was found not guilty – doesn’t mean he was, all the pupils who had to suffer because of this odious little man are wrong? They are all making it up? What a load of old tosh, I wasn’t a pretty boy, I was a fat lump so would have never rocked his boat, the same as Paddy Printer or Roy Lillyman ( Warr’s fellow teachers)  another two I can’t wait to die, both awful men, just because you didn’t suffer at their hands doesn’t mean it didn’t happen”.


Bruce Moss posted: ” If his book reflects his court case, which it apparently does then I can  categorically confirm that there are at least two key area’s of his defence that were complete lies”.

John Baker posted: ” Not sure if he was found not guilty to be fair, think it was more based on insufficient evidence if memory serves. He also lied -said he never overseen showers, I can safely say he did at Collingwood, Hawke and probably other houses”


Warr in his court defence had always claimed he never supervised the children’s show routines but ex pupils clearly remember him doing so, demonstrating a blatant lie to the justice system.

Bruce Moss described how Warr made him feel uncomfortable in the showers and also was invited to smoking and drinking he posted: ” In Blake house when he supervised the showers we felt very uncomfortable. We would put our legs on the bench to stop him looking. Someone would cough as he walked along the line so you could change legs, I’m glad to say he never abused me in any other way other than screaming and spitting in my face and being an obnoxious bully, he was my no means the model teacher he paints himself as,I recall being invited to his flat when I was was 14 or 15 and being supplied with cigarettes and booze by him”

Iain Kair posted: ” Those who know what he did know he was guilty, good riddance to bad rubbish that “school” has a lot to answer for.

Darren Green told of one of his experiences at the hands of Warr he said ” I don’t call pulling mr out of my chair to the front of the class, screaming in my face and finger jabbing me in my chest normal actions… I don’t call pulling me down the corridor by my ear to stand me outside the old teachers common room normal … this is child abuse”

And then Darren went onto say ” People are just mentioning his quotes in his toilet book which is rammed full of lies… why oh why the authorities didn’t look into this god will only know … because of these lies he got a not guilty and boy did he let the world know – except 2 to 300 witnesses at RHS in the 80’s may even of been more! I wonder if he mentioned the gatherings  around his flat in his book…I very much doubt this… this is going to drag on like Jimmy Saville…. he got away with it for years till his death”

Darren went onto explain that he was one of those interviewed by the police when questioned by another pupil in the forum for old boys, he said “Others were not playing the victim or told bare face lies in court and in print… and what I do know I told the police everything when interviewed by them”

With so many ex pupils known as ” RHS Old Boys” posting to social media of the experiences as the rejoice Warr’s death it could appear good lawyers against old school boys statements got him off the hook legally.

The Royal Hospital school where Warr served as a master was a school at the time set up for seafarers sons of the Royal Navy, it consisted of 11 H block type houses where children from the age 11 resided with around 100 children to each house, with a Housemaster and matron on site in each house. The housemaster lived in a flat adjoining the house, whilst the matron had an internal flat.

Routine was completely different to any other school like it in the country, the young children would be awoken early in their houses from 2 dormitories containing 50 children each as early as 5 AM and filed in line to a shower block of 50 showers supervised normally by the housemaster or one of his understudies. One of the allegations Simon Warr denied ever doing in his legalities despite hundreds of witnesses claiming other wise.

After showers were finished the young children would be detailed house duties after making their beds on a rota from sweeping out the dormitories to polishing all the brass around the house, 6 formers were known as ” Chief Officers” and handed out the duties.

Bed inspections took place each morning – hospital corners were expected and the top bedding bed covers had to be strictly creased in line with the schools emblem, if a child a had a crease in a sheet anywhere or creases did not line up, the bed would be turned upside down and launched furiously across the dormitory, after the jobs and inspections were done the children would form in the quadrangle of the house that divided the junior and senior sides and each house would ” fall in” as a squad and be marched to breakfast in step as a marching squad. The regime up until the late 80’s was brutal for many children especially in the earlier years through the 60’s 70’s and early 80’s with corporal punishment dished out for the slightest offence by a large bamboo cane across the back side leaving wounding cuts that some ex pupils still suffer the scars today.

The school was run as if the children were in the Royal Navy once they joined at the age of 11, bullying was rife amongst the children but not just from fellow pupils but also the masters as well who all lived just outside the school gates in provided housing.

Whilst the school has moved on and become one of the top private schools in the UK many clearly have scarred memories of its haunting past especially whilst Simon Warr is in the headlines again.

Tiering decisions to be made through national command structure