the art of publishing
More
Home News US school bus urging public to get Prince Andrew to ‘call the...

A US-style school bus urging the public to ‘get Prince Andrew to call the FBI’ if they see him was spotted driving around Buckingham Palace today.

The School bus drove through London and around the perimeter of Buckingham Palace and was emblazoned with the words, ‘If you see this man please ask him to call the FBI to answer their questions’ 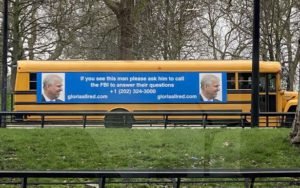 This comes as the Duke was seen today for the first time since his 60th birthday, leaving Royal Lodge, the Windsor residence he shares with his ex-wife, Fergie.


In the wake of his association with Jeffrey Epstein — the disgraced U.S. financier who was found dead in a New York prison cell last August, the Duke had notably subdued 60th birthday celebrations.

He reportedly celebrated with his ex-wife at the Royal Lodge – in stark contrast to the weekend-long party he enjoyed at St James’s Palace for his 50th birthday.


The poster on the side of the bus also featured the website address for attorney Gloria Allred, who is representing several alleged victims of billionaire paedophile, Jeffrey Epstein.

During a press conference in New York last year Ms. Allred said Prince Andrew ‘has an obligation’ to meet with investigators to disclose what he knew about Epstein.

It is not known whether she is involved in the bus stunt.