The mayor of Motril, Luisa García Chamorro, and the manager of Motril Cinema, José Julio Juárez, have announced a family film series that will take place at the Tourism Development Centre of the Costa Tropical over the next three months.

García Chamorro has indicated that the children’s films that will be broadcast are aimed especially at the youngest ones, but can also be enjoyed by the whole family, and has highlighted the free nature of these projections. 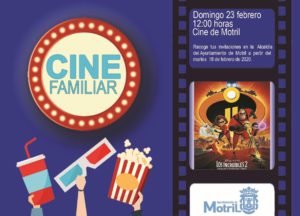 The invitations may be picked up at the Consistory of Motril from February 18. The films ‘The Incredibles 2’, ‘Ralph Breaks the Internet’, ‘ How to train your dragon 3’ and ‘Sherlock Gnomes’ will be screened on Sundays at 12:00 from February 23.