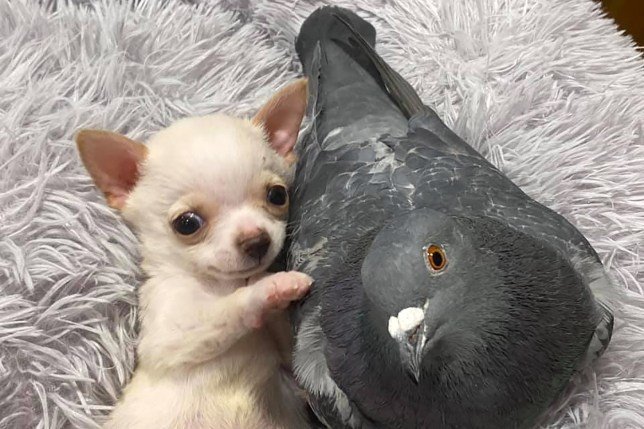 A puppy unable to walk and a pigeon unable to fly have formed an unlikely friendship after being rescued.

Lundy, the two-month-old Chihuahua puppy arrived at the Mia foundation in New York last month. He was retrieved from a North Carolina breeder who noticed the small dog was experiencing issues walking – usually linked to spinal damage.

The young pup was swift to become friends with one of the oldest residents in the rescue – Herman the pigeon, who is unable to fly.

The pair have since been described as ‘inseparable’ and are regularly seen cuddling at the rescue’s facilities.

The Mia Foundation’s founder, Sue Rogers, has said: “I set Herman on a dog bed and started caring for Lundy, and I decided to carefully put Lundy in the same dog bed next to him.


“They started interacting immediately in a very cute way.”

Sue has since become uncertain that Herman the pigeon is even male, after witnessing the pigeon’s maternal behaviour towards Lundy.


Herman is a permanent resident at the rescue, however they’re hoping to provide a wheelchair for Lundy and and find a family willing to adopt him.