Unconfirmed reports which are sounding positive are that missing man Dennis Walker has been found with a broken leg in a local hospital in Benidorm.

As we publish we are contacting family members for full confirmation.

Dennis left his hotel a day early after a nasty fall in Benidorm and feeling unwell and planned to return to the UK a day earlier but never arrived home on an earlier flight or the scheduled flight a day later alarming his family and causing them great concern.

The concerned family contacted the EWN and we launched an immediate appeal through all our channels of Social media and website.


Hopefully this has paid off and Dennis despite a broken leg is alive and being looked after.

We have now had in confirmed by a family member it is the case Dennis has been found in an Alicante hospital. 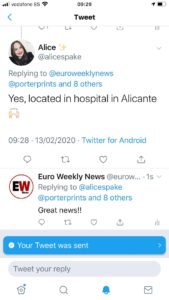