A driver desperately pulled over to help what he thought was an injured leopard lying in the road. However, it was just ‘just some tart’s coat.’

Ben Lilly was driving though Henden Bridge when he spotted what he thought was a dead leopard. He turned his vehicle around and cautiously headed towards the potential animal. As he reached the big cat, he soon came to the realisation that it was indeed someone’s leopard themed onesie that included a tail.

Mr Lilly shared his confusing encounter on his Facebook page, noting that he was embarrassed by his silly mistake.

He wrote: “Careful! Dead leopard in the road on way to Halifax! Oh no, it’s some tart’s coat from last night, can’t believe I turned back for this!” 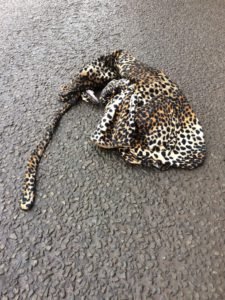 His Facebook post did receive a decent amount of attention. The post was shared over 5,000 times and received over 150 comments. Some fellow users shared how they were also duped by the leopard outfit – confirming to Lilly that it wasn’t just him that was caught off guard.

Mr Lilly, from Halifax, West Yorkshire, said: “My heart was racing with a kind of excitement. I thought ‘is this a big cat?’ It would be an amazing thing to find.

“I saw something in the distance as I was coming round the bend and slowed down, giving it a wide berth in case it was an injured animal.

“As I passed it, I looked out the passenger’s window and saw the markings on it. It had the tail bit on it too, so it looked really real while I was driving.

“I thought “wow”. You hear of these sightings of big cats and around the Halifax area, there have been reports before. I spun round where I could, turned round and drove back along. I looked again – it looked real. I then parked behind it and looked from within the car. 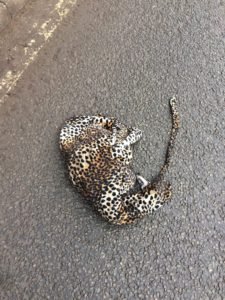 “I got out cautiously, because I didn’t want something taking my face off, but as soon as I looked at it from the other angle I started laughing.”

Mr Lilly continued, saying “I crept up with my phone out and as the angle changed, I felt like I was on candid camera. Iwas chuckling to myself. I started laughing then to save my own embarrassment.

“I pulled up to a onesie. That explains the tail on it. At the time I thought it was a woman’s fur coat. I thought someone had had a good time and left their coat behind.Living near the Pennines you do often see road kill in the road – foxes, badgers or the odd person’s pet.

“When I came back later, someone had pushed it onto the pavement. A few people had commented saying they’d also seen it. Other drivers were obviously thinking the same thing, but I was just silly enough to stop.

“I made a joke which a couple of people might have thought was a little bit sexist, but at the time it had been a Friday night, it was Saturday morning and Halifax is a bit of a drinking town.”

It later turned out that several people had driven past the spotted clothing, but were not overly keen to stop and have a look.