Peter Queen the life and soul passed away today bringing the region of Fuengirola to total shock.

Peter was a character of life, a man with a massive heart who brought love to everybody he  met.

He was famous in the local area of Fuengirola for walking the sea front and handing out presents to all the Spanish children who used to ask ” When’s Papa coming today?”

Peter and his family from Hartlepool have come to the area of Fuengirola for over 20 years for long periods and he was probably due to his massive heart and character the most known man along the sea front, his joyful way of life and character was booming for all to see, wherever he went he was remembered until his next visit.

Peter was known for his generosity, not by holiday makers, but by hundreds of local families and children as he would stroll along the sea front handing out presents on every visit to Spain.

Unfortunately  the big hearted man on this 2 month visit was taken ill and rushed to Marbella hospital and entered a coma, today his life support was turned off at 2.30pm but typically of the big loveable man, he stayed alive until 4.30 until he sadly passed away.

For the last few days children have been heard to be calling out, ” Where’s Papa today”  from many bars and restaurants that the big loveable man would pass.

Los Boliches has seen tonight, hundreds turn out to pay their respects, shocked at the news of Peter’s passing as wakes take place in many sea front bars.

It’s a tight community on the Costa del Sol and the local legend will sadly be missed and not forgotten by both Spanish and British locals.

May you rest in peace Peter. You brought love and warmth to everyone you met! 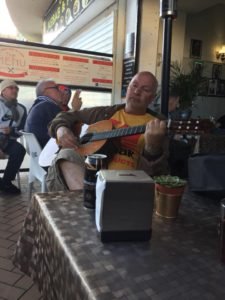 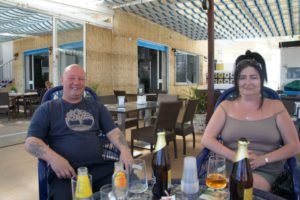