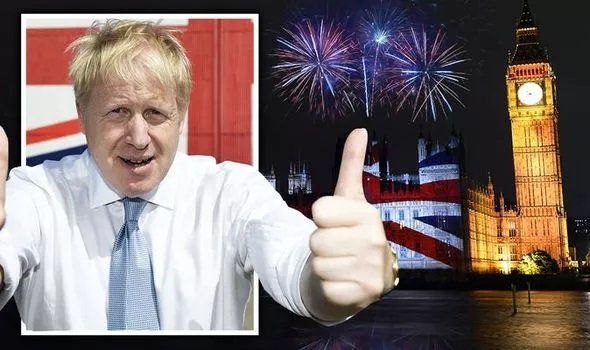 BORIS JOHNSON is to celebrate Brexit with Union flags, a commemorative coin and a massive projected countdown clock on the facade of 10 Downing Street, the Government announced last night. The Prime Minister will also directly address the nation on the need to “heal the divisions” left by the 2016 EU referendum campaign on the night of the UK’s departure from the bloc.

And the final hour approaches before the country’s formal exit at 11pm on January 31 it  will be counted down second-by-second on a massive digital clock projected onto the facade of 10 Downing Street. There will also be thousands of Union Jack Flags flying all over the capital as the Uk gets released from the “shackles” of the EU.

Boris Johnson will chair a special meeting of his Cabinet in the north of England on January 31, where ministers will discuss the Government’s plans to spread prosperity and opportunity across the UK. Ministers will discuss initiatives to “reunite communities”, how to “level up” the spread of wealth across the country and “look forward to the country that we want to build over the next decade.”

A commemorative Brexit 50p coin will also come into circulation on Brexit day.

The Prime Minister is expected to be one of the first to receive the new coin, which will be inscribed with the words: “Peace, prosperity and friendship with all nations” and the Brexit day. More than a million Brexit coins were minted last year but were melted down after the initial March 29 Brexit date was cancelled.


In the evening, the Prime Minister will make his speech on his vision of the country’s future outside the EU. His address will be broadcast live on television. In the final hour of the UK’s EU membership, Government buildings around Whitehall will be illuminated with spotlights and a light show will be triggered in Downing Street including projecting the countdown clock on the black bricks of Number 10.

As yet it is not definite that Big Ben will be ready to bring Brexit in as the funding required to repair so far has not reached its target.