Iran’s Supreme Leader Ayatollah Ali Khamenei has said European nations including the UK “cannot be trusted” but Tehran will accept negotiating with countries – apart from the United States.

Sending out the message in his first sermon in eight years in Tehran, the top cleric slated Donald Trump as a “clown” who only pretended to support the Iranian people and would “push a poisonous dagger” into their back.

He also also claimed missile strikes against US targets in retaliation for the assassination of Iran’s top military commander as a “slap on the face” to the Americans.

Mr Khamenei’s defiant and damming address came as the Iranian leadership faced pressure both at home and abroad with thousands and thousands turning out to listen to his powerful sermon to the people of Iran. 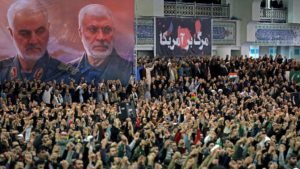