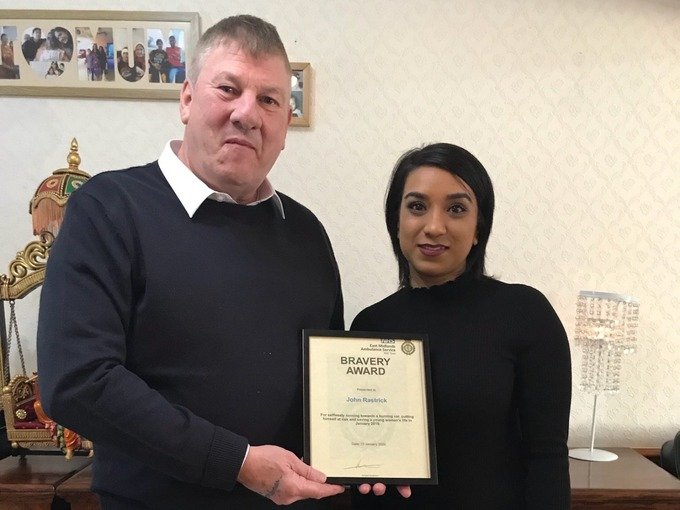 John Rastrick has been given a bravery award for retrieving a woman from a burning car, seconds before explosion.

Pari Mistry, 27, was trapped inside her vehicle following an accident on the M1 motorway. Her car ignited soon after and placed Mistry into shock as she struggled to exit the flames. Luckily, Rastrick intervened seconds before the vehicle was completely destroyed.

The initial accident took place directly in front of Rastrick, who then instinctively leapt out from his cabin, rushing towards the flames.

In a statement, Rastrick said “I saw her car spin two or three times when another car collided with her, and her vehicle immediately set on fire.

“I just knew at that moment that there was no-one else around to help and I had to do what was right.”

Additional drivers intervened to help pull Ms Mistry away from the scene, with the vehicle exploding and estimated 29 seconds later.

Mistry was rushed to hospital and placed into the critical care unit with a skull fracture. She remained there for four days. During this time, she underwent an eight hour operation. Due to her injuries, she had to re learn how to both walk and talk. She has since been able to meet Rastrick, the man who saved her life.

She said: “I don’t remember much from the incident, apart from what I have been told, but I know I immediately thought I was going to die.”

The two have remained in touch almost a year after the incident took place, in January 2019. John Rastrick was presented with the award by his grateful friend – alongside paramedics that attended the accident.


Ms Mistry, from Leicester, said: “For my family, this incident was especially hard as we are all really close. With their support and help, I was able to persevere with my recovery and say thank you to John in my own words. John didn’t just save my life. He saved the lives of my mum, dad and brother too.”