Police are offering a $1 million reward for information about the abduction and suspected murder of toddler Cheryl Grimmer five decades ago. It follows a major crime review of the case conducted by police last year

A man was due to face a Supreme Court trial last year but charges against him were dropped.

It is 50 years to the day since the three-year-old was kidnapped from changing sheds at Fairy Meadow Beach, near Wollongong, on January 12, 1970. She had been spending the day at the beach with her mother and three brothers when she disappeared. Despite extensive searches the toddler was never found.

A man, who cannot be named for legal reasons, was due to face a murder trial in the NSW Supreme Court early last year, but the charges against him were dropped after key evidence was ruled inadmissible. A judge ruled the man’s interview with police from April 1971 could not be used in court because there had been no parent, adult or lawyer accompanying the then-17-year-old.

Late last year police undertook a major crime review of the case, scouring through decades-old files to search for fresh evidence. In 2011, a coroner ruled Cheryl likely died but the circumstances surrounding her death remained unknown. Homicide Squad Commander, Detective Superintendent Daniel Doherty, said detectives were appealing to those with information who had not previously come forward.


“Witnesses at the time reported seeing an unknown male carrying Cheryl towards the car park 50 years ago today, but there has been no trace of her ever since,” he said.

“We welcome any information that may assist the investigation — there are now a million reasons to come forward.”

‘You cannot hide this evilness’

The Grimmer family and friends have commemorated the anniversary by walking to Fairy Meadow Beach where Cheryl disappeared.

A permanent plaque was also unveiled. 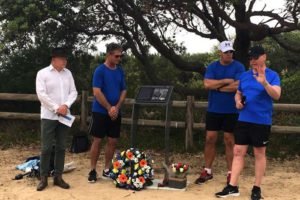 Her brothers Ricki Nash and Paul Grimmer were wearing royal blue t-shirts — the colour of Cheryl’s swimsuit that day. Mr Nash said the family hoped the reward would help give someone the courage to come forward.

“We just want some answers and we believe the answers are right in front of us,” he said.

“We believe somebody has the answer that can get this person, this evilness, to come out of the shadows.

“You cannot hide a secret like this for 50 years. The person who took her has said something to somebody — you cannot hide this evilness.”