the art of publishing
More
Home News SHAKEN BUT NOT STIRRED: Beyonce sips a Martini at the Golden Globe...

She uploaded a picture to her Instagram account, which had fans convinced of her involvement in the flick which comes out in April. It comes a day after Bond actor Daniel Craig was also seen enjoying a very different tipple to usual.

In a TV ad ahead of the movie — his last outing as 007 — Daniel Craig is seen drinking a zero per cent Heineken. The 20-second clip has him in a tuxedo as a bartender makes a cocktail — possibly his favourite vodka martini ‘shaken, not stirred’. 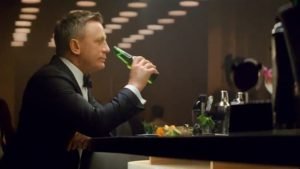 Offered the drink, 007 shakes his head and points to the alcohol-free booze and explains: “I’m working.” Beyonce has been busy recently working on her highly-anticipated Ivy Park x Adidas collection, which is set to be released later this month.