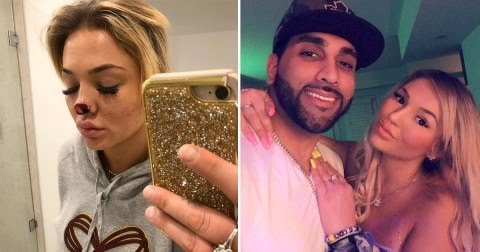 A woman is awaiting surgery after her now ex-boyfriend allegedly bit her nose, once he received the news that she wanted to end their relationship.

Allyson Danylko, 24, has stated that her ex partner Nick Grewel, 30, allegedly refused to allow her to leave his home. This scenario escalated as Grewel allegedly cornered her into the bathroom and began assaulting her. It is currently suspected that Grewel either proceeded to eat the removed flesh or discarded it into a toilet.

The events took place after the couple had been out celebrating New Years Eve in Toronto, Canada. The conflict was ignited by an argument within a nightclub. Grewel’s anger only climbed as he revealed his jealousy towards Danylko.

Danylko managed to flee and seek help at approximately 6.20am on January 1st.

She said: ‘We were arguing before we left to go out on New Years Eve and when we finally got to the club at around midnight – he was acting weird. ‘He kept trying to push my buttons by referring to me as his “b****” which he knows I hate – he was looking for an argument. ‘When we left, we argued, and I ended our relationship as I was due to go and volunteer in Costa Rica on January 7. ‘He wouldn’t let me leave and cornered me in the bathroom, I began to scream for help so he put his fingers down my throat which didn’t shut me up. ‘He gave me a crazy look and then bit my nose off. ‘It was gushing with blood so I ran but even then, he was trying to block my way. I managed to get out the house and sprinted to a neighbours house. ‘I was banging on their door for help and they rang the police. ‘I didn’t even realise my nose was missing until two hours later when I looked in the mirror. I am traumatised.”


Danylko is planning on using sections of her own ear to reconstruct her nose, while also starting her own fundraising event to support the surgey.

She has further stated that this was not the first case of physical harm that Grewel caused her; claiming she had a restraining order against him after he struck her in August 2019.

She adds: ‘The police returned to his property and they said my nose was no where to be seen so it is likely he either ate or flushed it. ‘He is so messed up, I believe he would do either. ‘Our relationship wasn’t good, he was always starting arguments over the silliest of things such as me asking to change the music. ‘If I had known he would be more violent the second time round then I wouldn’t have gotten back with him. ‘I am open about what has happened because I want to be the voice for those who are in domestically abusive relationship.”

Nick Grewal, of Oakville, will be in Milton court on January 28th. He faces charges of aggravated assault, forcible confinement and failing to comply with probation.

Breaking News – Two men to be hung in Karachi Pakistan