Piers Morgan has branded Holly Willoughby a fake, claiming she always rubs her National Television Awards victory in his face off camera.

Good Morning Britain has been shortlisted in the Live Magazine Show category at the NTAs 2020 alongside This Morning, presented by Willoughby and Phillip Schofield, and GMB host Morgan said he was sick of them winning every year.

Morgan fumed: “I’m not going this year. I’m sick of Holly and Phil winning every year. And Ant and Dec will win Best Presenter.

“Don’t be fooled by Holly Willoughby.”


This Morning has won the NTA in its nominated category every year for the last nine years. Ant McPartlin and Declan Donnelly have won best TV Presenter ever year for the past 19 years and are nominated once again. The awards are voted for by the general public.

This year’s nominations also saw The X Factor fail to make the shortlist for the Best Talent Show award for the first time in 13 years. The ITV show’s BBC rival Strictly Come Dancing has been nominated, against Dancing On Ice, The Voice UK and Britain’s Got Talent.

It comes amid speculation that the future of The X Factor is in doubt due to flagging audience figures. This year the regular show was replaced with a celebity version followed by X Factor: The Band, both of which failed to top the ratings. However, Simon Cowell is nominated in the TV Judge category for both The X Factor and Britain’s Got Talent. 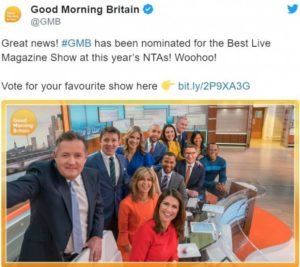 David Walliams will host the National Television Awards from The O2 London on January 28, airing live on ITV. Voting is open until 12pm on Tuesday, January 28.

The shortlisted nominations for the 2020 National Television Awards are: