A Bride-to-be has come under fire for demanding expensive gifts from each of the guests at her upcoming wedding, asking nothing below $250, and telling them not to come if they don’t fork out!

Weddings can be very expensive, between buying an outfit to wear, paying for transport to the venue and potentially forking out for a hotel stay overnight, costs can soon stack up and off course the obligatory wedding gift…

However, one bride-to-be isn’t giving her guests the option of buying presents and is instead demanding that they get her and her new husband something – and it has to be of a certain value.

A shocking text exchange between an unnamed bride and one of her wedding guests has been shared online in the Facebook group, That’s It I’m Wedding Shaming!

In the screenshots, the bride explains how she’s made it a requirement for all guests to give gifts of $250 (around £200) or above.

She writes: “Heyy, if you weren’t informed by Mike, it’s mine and Christian’s wedding next month!

“If you’re buying us gifts, the requirement is to buy us gifts above $250, for either me or Christian.”

Stunned, the bride’s pal replied: “So what you are saying is that you want something OVER $250?!?!” 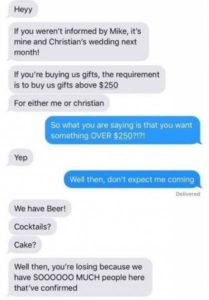 Her friend then says: “Well then, don’t expect me coming.”

And she’s not the only bride-to-be asking for a lot from people of late.

“However between bills and our children we just don’t have enough money saved up, it’s close to impossible it seems like to save back money when you have children. Seven to be exact.

“Due to his recent heart attack we would like as much help as possible to make this happen,” she continued.

“We’d also like for his grandmother to be able to attend. She would need her nurse there with her so we would need to be able to cover those expenses as well as the hotel stays, food, transportation, gas money for those in their own vehicles and then the resort.”

She added: “We are doing our best to set back what we can but we figured we’d ask for some help along the way.”

Unsurprisingly, people weren’t very sympathetic towards her plea – and many didn’t believe her story. One person commented: “Let’s throw in all of the sob stories and see what sticks. Seven kids, fiancé had a heart attack, sick grandma. Anyone? Anyone?”

A second replied: “Appalling… some people are shameful.”

With the average cost of a UK wedding now a whopping £32,273, finding the funds to afford your dream wedding can be a panic-inducing task.

Which is why more and more couples are coming up with creative ways to finance their big day, including asking their guests to stump up the cash – but is it ever acceptable to ask your guests to pay to attend your wedding?

So have couples struck upon an innovative and modern way of funding their wedding through selling tickets and crowdfunding, or it is selfish and stingy to expect someone else to pay for your big day?

While you might instinctively balk at the idea of asking guests to pay £150, a recent survey by Goldsmiths found that the average wedding guest spend is now £217. In theory, the couple were saving their guests £67 – but would you ever do it?