the art of publishing
More
Home News Spain British man with ‘biggest heart’ dies in tragic accident in Spain after...

A YOUNG British man has sadly died in a ‘tragic accident’ after returning from a music festival in Barcelona, Spain.

Tragedy is believed to have struck 22-year-old Jake Cooke from Salford, England, as he was on his way home from the Spanish city with his friends earlier this week.

Although the exact circumstances surrounding Jake’s death are yet to be revealed by his loved ones, his best friend has set up a GoFundMe page to raise funds to help cover the costs for the young man’s funeral to give him the ‘biggest and best send off he deserves’.

Lewis Jordan, who set up the page, described Jake as “the kindest lad” with “the biggest heart”. He wrote:

“Jayke Dylan Cooke was loved by everyone who he crossed paths with, he was the kindest lad with the biggest heart and the brightest future ahead of him.


“Known for his ‘talk to anyone’ personality and extremely talented art he touched everyone in their own special way.

“Sadly whilst at a festival in Barcelona Jayke has been taken from us all. Nothing will be able to bring back the lad we all love and respect but together we can pull as a team and raise money for his family and give him the biggest and best send off he deserves.” 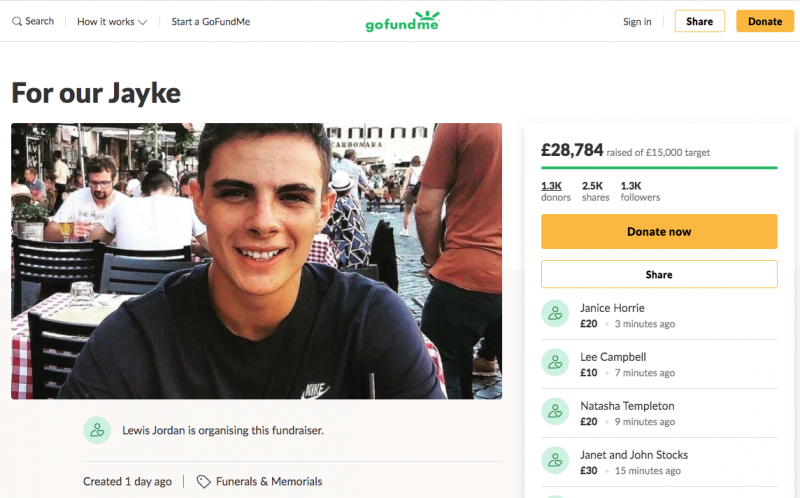 Honouring Jake, one generous donor said: “Jake you were one of life’s good guys and you’ll be deeply missed by so many people but you’ll live on in our memories and our hearts.”

Another said: “Jayke was an amazing young man – so polite, funny, genuine, talented…the list is endless. He made me laugh with every conversation we had.”

On Friday evening (January 3) the fundraising campaign had surpassed its targeted £15,000 sum, where more than 1,200 donations were made totalling over £25,000.