Chris Barker often visited Spain and was regularly spotted in Marbella, one of the best-known resorts on the Costa del Sol. Its beaches, night clubs and luxury venues are famous the world over and attract some of the world’s top celebrities. He also loved Mallorca, frequenting the exclusive clubs Disco Bolero, SA Lluna, all top end late night Discoteques on the island and  favourites with the locals, until the early hours of the morning.

Chris was found dead in Cardiff on New Year’s Day, it is believed he leaves behind a girlfriend and two young daughters.

Police can confirm the sudden death of a 39 year-old man who was discovered at his home address in the Cyncoed area of Cardiff at approximately 2pm on New Year’s Day. His death is not being treated as suspicious and the Coroner has been informed.

Chris had a sterling career, he was a professional footballer who played as a defender. He has also represented Alfreton Town, Barnsley, Cardiff City, Stoke City, Colchester United, Queens Park Rangers, Plymouth Argyle, and Southend United since beginning his career in 1997, he was held in high esteem by friends, fans and fellow team members, he was well respected.

“It is with great sadness that we learn of the untimely and tragic passing at the age of 39 of Chris Barker,” tweeted Barker’s former management company, World In Motion. “Chris was a client throughout his outstanding playing career of over 500 League games for clubs including Barnsley, Cardiff City, Queens Park Rangers and Plymouth Argyle. Moreover, Chris was a wonderful person, an absolute gentleman and a pleasure to work for.”

The accolades continue to flood in for Chris;

Ex-Cardiff captain and Barker’s former team-mate Darren Purse was one of the first to lead the tributes along with former Wales international Joe Ledley..

Purse wrote: “Waking up this morning to the terrible news that Chris Barker is no longer with us.

Ledley tweeted: “Devastating news to hear the loss of Chris Barker my thoughts are with his family and friends, One of the most down to earth guys I’ve met. Will be truly missed. Rest In Peace barks.”

And Andy Campbell, the man who scored the winner in the 2003 League One Play-Off Final for Cardiff against QPR, wrote: “RIP Chris Barker, so so sad. A friend, a teammate & all round nice fella.

“A good solid hard player on the field & great banter off it. Had some quality days and nights on the beer.

“My thoughts & prayers with his family & daughter at this sad time.” 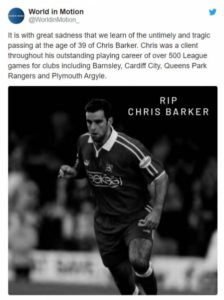 Chris’s brother Richie is also a former pro footballer and is currently assistant manager at League One Rotherham United.