Seven badly decomposed bodies were found in a suspected North Korean fishing boat that washed up on a Japanese island, a coast guard official.

The remains were found on Saturday in a broken vessel on the shore of Sado Island, which lies around 900km from North Korea across the Sea of Japan.

“Five of the bodies were identified as men but the remaining two could not be identified,” the official said.

“There have been similar cases but this was the first discovery of bodies in such a wrecked boat on this island this year.”

Sometimes North Koreans are found alive on such boats and have been deported.  Japan and North Korea have no diplomatic ties. Japan has stepped up patrols in coastal areas to guard against poaching. Korean alphabet and numbers were painted on the wooden hull (pic), which was broken in half, he said, adding that there was nothing to show their nationality. 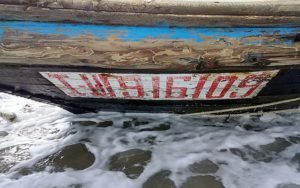 Local media said the Japanese police and coast guard were investigating the case, suspecting the vessel departed from North Korea. In 2019 at least 156 suspected North Korean fishing vessels have washed up on Japan’s coast or been found drifting in Japanese waters, the Japanese newspaper Yomiuri Shimbun has reported.

Experts say some North Korean fishermen are travelling far out to sea in order to satisfy government mandates for bigger catches. But their old and poorly equipped vessels are prone to mechanical and other problems, including running out of fuel, and there are few ways for them to call for rescue.

Some of the boats wash up on Japanese shores with dead crews and are dubbed “ghosts ships” by local media.

In 2018, 10 North Koreans rescued from a tiny wooden boat drifting off northern Japan were deported. In October around 60 members of a North Korean fishing boat were rescued in the Sea of Japan after it sank following a collision with a Japanese patrol vessel.

The U.N. World Food Program visited North Korea and found desolation. More than 10 million people, or roughly 40 percent of the country, suffer from “severe food insecurity,” meaning they don’t have enough food to eat until the next harvest. Official rations are at 300 grams of food daily, and many people subsist on a diet of rice and cabbage.