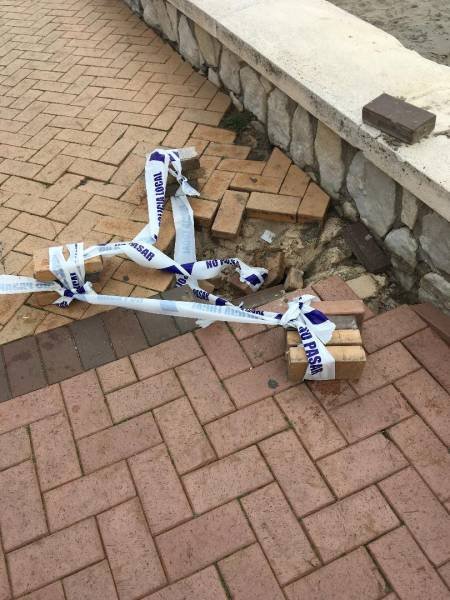 Portly Bob Murphy  decided to take up jogging whilst in Spain but it’s ended up in disaster.

Bob 54 decided on Boxing Day morning he needed to lose weight as he tried the scales and was horrified to find he had joined the 15 stone club in the run up to Christmas through excessive eating and drinking. 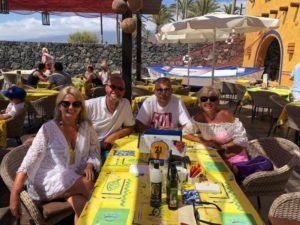 Boxing Day morning with the sports shops open in Fuengirola Spain he felt the pangs of guilt over his weight and headed out to buy fitness clothing and equipment with a mission to run off the excess weight he had put on.

Bob, donned his new sports gear and trainers, placed on his headphones and went for his first run in 15 years along the Spanish coast line.

Bob was doing well starting out at Fuengirola and jogging down the sea front when the disaster struck as paving gave and the uplifting bricks saw him take a nasty tumble which lead to him being thrown over the beach wall.

As he writhed in agony not being able to stand back up, passers by called the local emergency services as he yelled in pain, an ambulance was quickly on the scene and took him to Marbella hospital where it was confirmed he had broken his leg and two toes with also a hair line fracture to his ankle.

We caught up with Mr Murphy after his release this morning from hospital with his left leg and ankle fully plastered up.

Murphy told the Euro Weekly News ” I’m really not amused at all, I came to Spain for the winter and put on excess weight and decided through exercise to run it off, the last thing I expected was to take up fitness and up in in bleeding hospital on Boxing Day!”


” I was running at gentle pace and getting used to being back running again after a 15 year lay off really when under my feet the brick work jut gave way, I tried to keep my balance but couldn’t and ended up flying over the wall and dropping quite away down onto the beach, I landed awkwardly and that must have been when the break occurred.” said Bob

” I was in agony, the pain was excruciating and I’m so thankful to the passers by who called the ambulance for me, I was given pain relief by the emergency medical team and whisked off to hospital, I really can’t thank them enough”.

” Don’t get me wrong I love Spain in general and we are thinking about moving here permanently but the pavements and roads really need sorting out, I could have broken my neck” said Bob.

Bob is expected to be in plaster for at least 8 weeks, but he doesn’t feel too bitter although he’s not look forward to seeing his pals too much.

” I’m going to get some serious stick over this – I gave it large on Facebook how and what I was going to do and I ended up in this state, but they won’t be pulling my leg that’s for sure!” he chuckled.

Whilst Bob can see the funny side though it could have been worse as eyewitness Wendy O’Williams pointed out, ” I was coming out the supermarket and just saw him fly over the wall, I thought I was seeing things! – there’s a big hole there now and all the police have done is stick tape around it – I can see another accident coming if it’s not fixed soon” 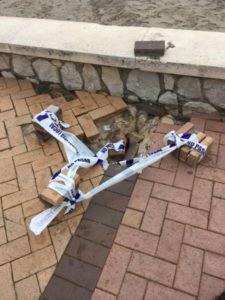