A GANG that allegedly planned to steal drugs from a rival criminal organisation and kill the man guarding the narcotics has been broken up.

As part of the police operation 26 people alleged to be part of a ring that transported huge amounts of hashish from Malaga on the Costa del Sol to Paris and Marseille in France have been arrested. 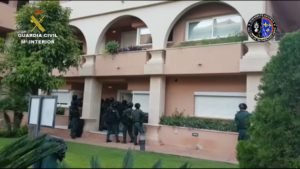 In Operation Tenebro, the Guardia Civil and the French National Gendarmerie arrested the alleged leaders of the group in France, while those suspected of being in charge of logistics, storage and distribution of the drugs were arrested in Malaga. They are all charged with the crimes of membership of a criminal organisation, drug trafficking, vehicle theft and false documentation.

Of the 19 searches carried out in Paris, Marseilles, Nerja, Marbella and Estepona, 5,950 kilograms of hashish, €750,000 in cash, five high-end vehicles – one stolen in France and recovered in Spain – were seized, as well as numerous information and communication systems. 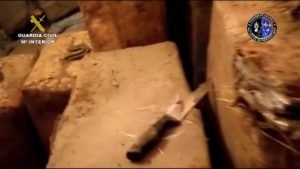 An investigation started more than a year ago and was developed in several phases.  In the first phase, the Guardia Civil learned of the organisation’s intention to kill a person in charge of guarding the drugs of several drug trafficking organisations. The detainees, police say, wanted to steal the drugs and frame the person they allegedly planned to kill for the theft.

A first police operation established in Nerja stopped four members of the organisation when they tried to escape in a vehicle. In the search of a house, a fifth person was arrested and 2,100 kilograms of hashish and several French number plates were found.

Following these initial arrests, a joint investigation was launched with the French National Gendarmerie. This exchange of information between the two police forces led to the seizure of 3,850 kilograms of hashish on French soil.

In a subsequent phase of the investigation in both countries, the total dismantling of this organisation was achieved say police, with the arrest of 18 people in France – among them the alleged ringleaders – and two more in the province of Malaga.

The investigation was carried out by the Organised Crime and Anti-Drug Team (EDOA) of the Judicial Police Organic Unit of the Malaga Guardia Civil Command in collaboration with the National Gendarmerie of Paris-Marseille.