A COCAINE smuggling ring that was bringing large quantities of the drug to the Canary Islands has been broken up.

A total of 18 simultaneous searches have been carried out in different parts of the Spain, with 111 kilograms of cocaine, another kilo of MDMA and several weapons being seized.

The Guardia Civil, the National Police and the Inland Revenue, within the framework of operation PARCE/CRISAL started an operation  the spring of last year when Customs Surveillance officials from the Canary Islands Tax Office arrested a man in Tenerife, when he was attempting to receive a postal package containing 15 kilos of cocaine and 1 kilo of MDMA.

As a result of the operational coordination of the three agencies, a complex criminal network with several years of activity was found to be behind the shipment.

As a consequence of the police seizure, the organization was forced to look for other ways of introducing and distributing drugs to the Canary Islands. Instead of using a mail company, it chose to send drugs through so-called “mules”, human couriers on domestic flights.

Once again, as a result of police work, this new method of sending drugs to the Canary Islands was detected, and a series of consecutive actions were carried out, resulting in the arrest of 12 “mules” and the seizure of nine kilos of cocaine.

Continuing with the investigation, the suspected leader of the organisation was traced to Madrid and identified as a Colombian man.


T.P.M, alias “La Negra”, has a history of drug trafficking in Spain related to the smuggling of tons of cocaine over the years, according to police.

They say he had the collaboration of a “family clan” located in Seseña (Toledo) composed of six members of the same family, all of them Colombians.

The “mule network” was dismantled by the police, and the organization resumed the original method of sending camouflaged drugs in packages. This was again interrupted by investigators when they detected and intercepted last summer a shipment to the Canary Islands consisting of a refrigerator that had 38 kilos of cocaine hidden inside.

The numerous shipments of cocaine seized, caused great economic losses to the organization, whose debts exceeded €3 million in addition to the consequent pressure from the Colombian cartels supplying the drug, which led the criminal group to seek new alternatives, finding a new supply route in Galicia. 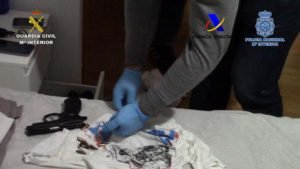 It was there that they established contact with Galician drug traffickers, with the idea of preparing a new shipment of cocaine by sea in a container from South America. It was noted by the agents that while this “importation” was being negotiated, they again began to acquire small consignments of cocaine in order to maintain their status and obtain money to finance it.

However, this illegal operation was again cancelled by the investigators when they arrested two more mules that were transporting cocaine by road from Pontevedra. One of them was arrested in Zaragoza with a 1 kg and the other in Orense with another 10 kg of the same substance. 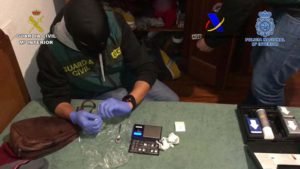 It should be noted that in order to do this new business, the members of the organization were doing their meetings in the emergency rooms of a hospital pretending to be sick and in this way avoiding being detected when they were doing drug exchanges.

At this point, the operational phase of the investigation was carried out, in which a total of 18 house searches were conducted simultaneously in the provinces of Pontevedra, Madrid, Toledo, Guadalajara, Lanzarote and Tenerife, resulting in the arrest of 23 people charged with the crimes of membership of a criminal organization, money laundering, trafficking