Brussels chaos: Spain follows Poland in shock threat to quit EU ‘No more humiliation!’ is this the start of ‘Spaxit’ ?

THERE is mounting pressure in Spain for right-wing parties to back a Brexit-style departure from the EU, following widespread fury across the country at a ruling by the European Court of Justice (ECJ).

Spain has joined Poland in becoming the second country this week to claim it could ditch the EU, amid growing fury at the power that Brussels holds over member-states. Spain’s third biggest party Vox is under huge pressure to back the Spanish version of the Brexit referendum, following growing fury at an ECJ ruling this week. Vox’s own party president lambasted the EU, claiming when the ECJ overruled Spanish courts, it had humiliated the country and its sovereignty. 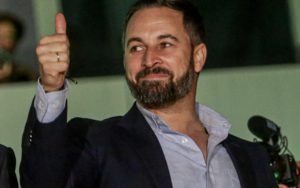 Santiago Abascal, the president of Vox

On Thursday, the EU’s top court ruled a jailed Catalan separatist leader should have parliamentary immunity. Oriol Junqueras was one of nine pro-independence leaders jailed in Spain after an illegal independence referendum.

However, in May he was elected to the European Parliament as an MEP.


The ruling rejected Madrid’s arguments that Mr Junqueras did not qualify as an MEP because he had not sworn an oath to the Spanish constitution. A furious reaction among Spaniards even led ‘Spaxit‘ – the Spanish exit of the European Union – to become trending on Twitter.

Vox President Santiago Abascal criticised the judges in Luxembourg who ruled that Mr Junqueras, who was sentenced to 13 years for sedition, should be freed. He immediately tweeted that Spain “should not have to comply” with the ECJ ruling.

He went on to claim that Spain should hit back at “this interference”, before adding that Vox “is not going to accept more humiliations”. Mr Abascal later tweeted: “Spain (as other countries do) should not abide by any judgement of those who attack our sovereignty and security.”

Vox, which took 52 seats in Congress at the last election, is the third biggest party in Spain and has seen its support surge in the past year. The party calls for the repatriation of powers from Brussels to national governments but has not publicly backed ‘Spaxit‘ yet, the far-right party is coming under pressure from its grassroots to campaign for a referendum to leave the EU.

Related: Mr Johnson followed up with monumental victory at the general election last week by amending his Brexit bill before it passed the Commons.

He ruled out extending the Brexit transition period beyond the end of 2020 , setting up a heated clash between Downing Street and Brussels.