Brexit man recently stated as we reported in the Euro Weekly News that he was going to continue but at last the pain in the backside has announced he’s admitted defeat and given up thankfully!

For over two years, he has been a complete pain to every news report broadcast from College Green, outside the Houses of Parliament.

But now after 847 days of heckling MPs, journalists and leavers, Steve Bray, 50, has decided to hang up his grey top hat and Union Flag.

Since September 5, 2017, Mr Bray has become a regular nuisance on the news broadcast from London by all channels.

He was every cameraman’s nightmare as he hovered behind presenters, constantly trying to get into shot with his anti-Brexit banners.

And, of course, there was his famous booming voice, shouting out ‘stop Brexit’ at levels that would make John ‘order, order’ Bercow sound like a church mouse.

The change of heart by Bray saw his final protest in London yesterday as he got one final chance to shout ‘bollocks to Boris’ as the Prime Minister returned to parliament.

Hopefully this is something to celebrate and the pain the backside won’t come back! 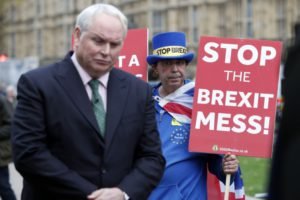 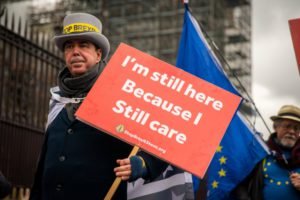