A family has been left homeless after B&Q lorry smashed through their home in the early hours of Tuesday.

David Hill, 31, said he woke up to the sound of a “huge thud” at around 3.30am as the HGV collided with the side of their end-of-terrace home in Harlow, Essex.

After rushing downstairs he discovered part of the lorry poking through the walls of his house and rushed upstairs to get his wife Hannah, 28.

Engineers are currently inspecting the property, which is believed to have been damaged structurally.

David said: “My wife and I were in our bedroom when I heard this huge thud. I didn’t know what it was or where it was coming from.

“I went downstairs and saw a lorry in my house! I ran upstairs to get my wife and we rushed outside.

David who is dad to two girls aged 10 and 12 was mainly just thankful that his daughters weren’t in at the time of the crash.

“We’re essentially homeless so we’re staying with family. We’re probably going to be with family for three to four weeks at the very least,” he added. 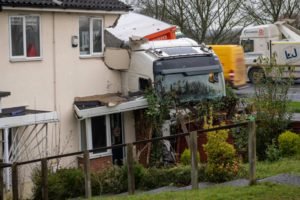 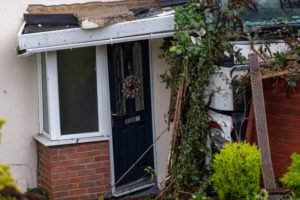