A woman Victoria Chamberlain has been banned from keeping animals for life after she left her dog with numerous broken bones and cigarette burn scars on its head.

Victoria Chamberlain who is 21, did not seek out any treatment for her dog Sasha after her boyfriend Joe Bucktrout abused the dog badly.

The RSPCA investigated when they were handed recordings of Bucktrout shouting at Sasha, followed by loud bangs and severe whimpering from the poor injured distressed dog.

Inspector Vanessa Reid said: ‘Sasha had sustained a number of severe injuries over several months including the dislocation of both hips – her left hip was out when we rescued her, which hadn’t had any veterinary attention, and she was operated on in RSPCA care. ‘She also had three fractured ribs that were in the process of healing and severe and obvious scarring to her head, consistent with burns most likely caused by cigarettes. 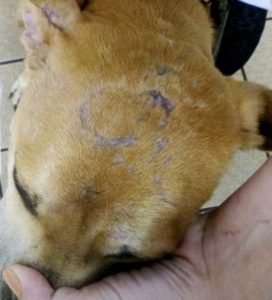 Un sympathetic Chamberlain claimed a cock and bull story that the first hip dislocation was due to an accident in the garden where a mattress had fallen on the dog.

‘The second dislocation was claimed  to have happened when Sasha was recovering from an operation to repair the first and fell down the stairs.

‘However, the veterinary expert dispelled this version of events and said that couldn’t be true and concluded that he believed the injuries were caused by intentional and repeated violence against her, which Bucktrout went on to admit in court.

Chamberlain who couldn’t even be bothered to turn up in court was found guilty of two cruelty charges in her absence at Leeds Magistrates Court. 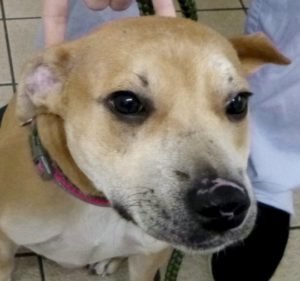 Unfortunately the dog owner from hell was spared jail time. She was sentenced to 10 weeks custodial suspended for 12 months, a 12 month community order and ordered to pay £1,000 costs.

Brute Boyfriend Bucktrout pleaded guilty to two cruelty offences and was jailed for 18 weeks and banned from keeping all animals for life.

Sasha thankfully was signed over to the RSPCA earlier on in the process and has now been rehomed with a loving family.

Inspector Reid said: ‘I’m so happy for her. She’s such a wonderful, loving dog who just craves affection despite all that has happened to her.’