The Euro Weekly News based on the Costa del Sol Spain has just revealed a missile has been launched.

The Euro Weekly News told readers on the Costa Del Sol that North Korea says it has carried out another “crucial test” at its long-range rocket launch site.

The announcement comes as North Korea continues to pressure Donald Trump over a deadline set for the end of the year by leader Kim Jong Un to salvage faltering nuclear negotiations. 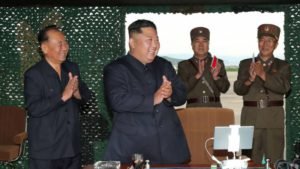