SPAIN’S Guardia Civil, in the framework of Operation “30 days at sea” has investigated a total of 46 people for crimes linked to marine pollution and waste trafficking.

They could face prison sentences of between six months to five years, with more than 101 related incidents detected in Spain.

This operation is the second in a series of actions, developed at the initiative of INTERPOL, aimed at effectively combating global marine pollution.

More than 61 countries around the world took part through more than 200 agencies. In Spain, the Seprona environmental and nature protection department of the Guardia Civil led the operation in which 1028 inspections were carried out on ships, ports, related companies, facilities and possible sources of emission spills.

The investigations have been aimed at detecting waste at sea, emissions of polluting gases from ships, discharges into the sea from shore and illegal traffic of waste.

The investigations carried out by the Guardia Civil in Spain have made it possible to detect a total of 25 illegal discharges into the sea, identifying those responsible. In some cases they caused a deterioration of the ecosystem so serious that native plant and animal populations were eliminated.

In this sense, the most affected areas are located on the coasts of Andalusia, Levante, the Balearic Islands, Galicia and the Canary Islands.

The most polluting spill has been registered in the Costa del Sol, where the flow of untreated domestic and industrial wastewater reached 34 million cubic metres.

In the Region of Murcia, after the recent floods and the detection of spills that have caused the death by suffocation of hundreds of fish, an investigation has been opened under the coordination of the Environmental Prosecutor’s Office. 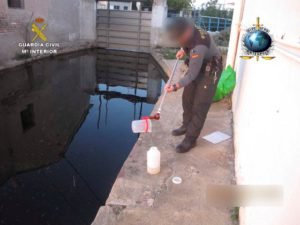 Seprona’s actions have also focused on preventing and prosecuting illicit trafficking in waste, in particular plastic waste. The Asian authorities have prioritised the fight against the uncontrolled dumping of imported plastics in their countries, with immediate consequences for the rest of the world.

Some companies who speculated on the sale of plastics to Asia for disposal have resorted to burning the plastic instead, a highly polluting procedure.

In Tenerife several people have been investigated for illegal shipment of hazardous waste to Africa, and in the Valencian Community several companies have been identified that obtained illicit benefits by exporting plastics to Asia. 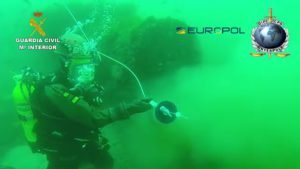 The operation was carried out by the Nature Protection Service of the Guardia Civil, with the collaboration of the DG of Merchant Marine and the AEAT (Directorate General of Customs and Special Taxes) and the School of Marine Engineering of the University of Cadiz in the measurements and studies of sulphides and NOx gases emitted by different ships.

Marine pollution poses a serious and growing threat to the environment, in particular to marine and coastal ecosystems. It poses risks to public health and food security due to the depletion of fish stocks, directly related to the economy of developing countries.

The latest studies point to the great influence of marine pollution on the growing climate emergency. The latest UN report warns of the loss of oxygen in the oceans due to the increase in emissions that pollute those waters and the atmosphere. A lack of oxygen threatens marine biodiversity and constitutes a growing threat to fishing.