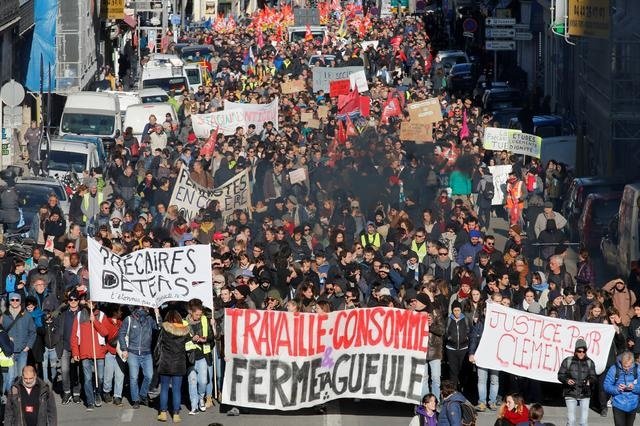 France’s unions bring pensions battle back onto the streets

In Paris Public sector workers marched peacefully through cities across France on Tuesday, heeding a call by trade unions to stage one of the biggest protests in decades in a revolt against President Emmanuel Macron’s pension reform. Commuters grappled with widespread transport chaos on a sixth day of strikes that unions said forced dozens of schools to close in Paris, airlines to cancel 20% of flights and refineries to halt distribution.

The Unions are Defiant

The unions show no sign of backing down in a battle that could define the presidency of former investment banker Macron, who is determined to simplify a system of more than 40 pension plans that provide some of the world’s most generous benefits. “Yes, there is a need to reform the pension system. But there’s no need to break it,” Philippe Martinez, head of the hard-left CGT union told public broadcaster France 2. “Macron’s project is each to his own. Ours is about solidarity.” The unions urged rail workers, doctors, teachers and other public workers to turn the screws on Macron before his government unveils the details of its proposal on Wednesday.

In Bordeaux and Marseille, thousands of protesters waved union flags and held up banners reading: “We have to get rid of Macron”. Demonstrations are also taking place in Rennes, Lyon, Nantes and Paris. In the capital, riot police fanned out along the Champs Elysees Boulevard in central Paris and barricaded streets leading to the offices of Macron and his prime minister.

Macron wants to replace the convoluted system with a single, points-based system, under which every pensioner has equal rights for each euro contributed. Failure to reform would mean a deficit of up to 17 billion euros ($18.74 billion), 0.7% of GDP, by 2025, an independent pension committee forecast. Macron is aware of the public opposition to simply raising the retirement age of 62. One alternative is to curb benefits for those who stop working before 64 and give a boost to those who leave later. A survey published in the Journal du Dimanche showed 53% of the public backed the strike for now.