A GERMAN walker had to be airlifted from Calpe’s landmark Penyal d’Ifach rock after suffering what Spanish press reported was a suspected stroke while climbing up the limestone outcrop on Monday afternoon.

As these dramatic pictures show, a rescue team from the Alicante firefighters’ consortium Benissa fire station evacuated the stricken walker from the narrow path leading up to the rock tunnel. 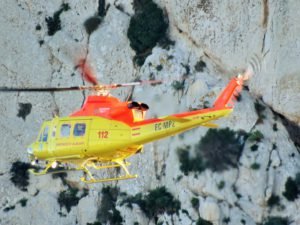 The helicopter then made immediately for the Sant Vicent del Rapeig park, where an ambulance was waiting to rush the German to the Alicante general hospital.

The hike up the 330-metre high rock is a popular visitor attraction.