Costa Blanca resident Stuart Bettey called us from the scene. Stuart who resides in Alicante  Costa Blanca is in New Delhi for business as he imports from factories in India for his customers on Costa Blanca.

Stuart told the Euro Weekly News “16 people are being treated for burns or smoke inhalation and more than 50 people have been moved to safety, I was in the factory two doors down where my rugs are made for my clients on the Costa Blanca which are retailed on the markets all across Costa Blanca from Alicante right up to Denia”


” We were on early business selecting rugs for the Costa Blanca markets and the fire started at around 7.30 AM just after our arrival, the scene was devastating people were running out on fire literally as bystanders helped them roll on the ground and threw buckets of water over them” Stuart added. 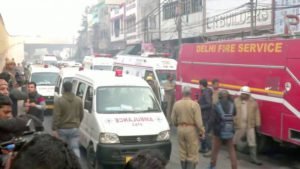