ALL SCHOOLS in New Delhi have been closed and people have been warned to stay indoors after the city’s pollution problem was declared a health emergency with the air quality index soaring over nine times the recommended World Health Organisation level.

Delhi Chief Minister Arvind Kejriwal said in a tweet that the government has decided to keep all schools in Delhi closed till November 5 as pollution levels continue to skyrocket due to smoke from crop burning in neighbouring states.

It is very imp that we protect ourselves from this toxic air. Through pvt & govt schools, we have started distributing 50 lakh masks today

I urge all Delhiites to use them whenever needed pic.twitter.com/MYwRz9euaq

Officials in India’s capital have also banned all construction in the region to control dust in the air as well as the restriction in the movement of diesel and petrol cars.

As the pollution level in the region entered the “severe plus” category, the Environment Pollution (Prevention and Control) Authority also banned the bursting of crackers during the winter season.

Movement of privately-owned cars has also been restricted with those running on petrol and diesel allowed into New Delhi only on alternate days from 4 to 15 November, depending on whether they have even or odd numbered plates.

Similar restrictions in 2016 reduced air pollution by up to 13%.

Free masks have been handed out to groups of young children while plans to sweep roads mechanically, plant trees and control pollution at 12 main locations in the city have also been announced.

Weather experts are of the view that increased wind speed due to a fresh western disturbance would help in dispersing pollutants faster from Saturday. 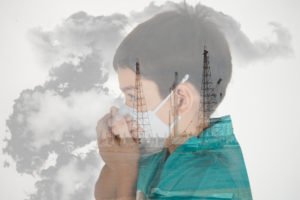