AROUND 55,000 people joined in the biggest demonstration Cartagena (Murcia) has ever seen to call for the Mar Menor to be ‘saved’.

“We don’t want a dead sea,” cried one group of demonstrators as they passed along a crowded Paseo de Alfonso XIII, yesterday (October 30). It was 7.30 in the early evening and, an hour after the departure, the head of the march had arrived at the doors of the Regional Assembly.  And a kilometre further back at the Plaza de España, a crowd continued to advance amid a wave of banners, a tide of slogans and a tidal wave of indignation.

“”Hoga, hoga, hoga, the Mar Menor is drowning”, chanted some young people, amidst the beating of drums.

“There must be no treatment with nitrates”, was heard loudly a little further on. Posters with slogans like “Idleness, corruption, resignation” slammed the political system that has allowed the pollution of the environmentally precious lagoon.

The massive crowds were putting voices and faces to the citizen unrest unleashed by the critical situation facing the lagoon by agricultural, urban and mining pollution.

It is an unrest that has been accumulating in recent weeks amongst environmental organisations, neighbourhood associations and concerned locals.

The protest movement wastriggered by the death of thousands of fish and crustaceans and then the appearance of a ‘green soup’ where the waters have turned a murky green. This has been blamed on discharges of nitrates and phosphates finding their way into the lagoon.

The protest march had already been called for by the Federation of Neighbourhood Associations of Cartagena (Favcac), with the support of the Association of Naturalists of the Southeast (Anse), Ecologists in Action, the Fishermen’s Guild of San Pedro del Pinatar and the platform Pact for the Mar Menor before these latest incidents.

But no one expected it to draw so many people. The environmental disasters to hit the lagoon, and the consequent economic and social effects, fed participation, with bus loads of protestors from all over the Campo de Cartagena and other municipalities of the Region.

Collectives such as Greenpeace and the Plataforma Pro Soterramiento de Murcia contributed to this, along with those who marched other groups, such as the Plataforma de Afectados por los Metales de la Sierra Minera de Cartagena. 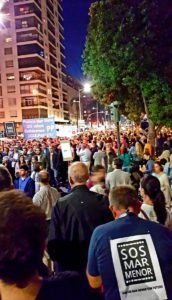 At the head of the demonstration were the president of the Federation, Leandro Sanchez, the spokeswoman of Pact, Celia Martinez, and the director of ANSE, Pedro Garcia.

In the final manifesto -read before the autonomous parliament by Martinez and by Sonia Vera – they demanded unity to take urgent and definitive measures.

They also called for those responsible for the contamination – they cited agroindustry – to be punished with the full force of the law.

The situation of the lagoon is now on the agenda if politicians. A proposed law will ban irrigation and permit only organic crops in a zone next to the Mar Menor.

The regulation would affect the strip of land bounded by the AP-7, the N-332 and the RM-12 to the lagoon and is intended to tackle agricultural run-off polluting the environmentally sensitive sea.

An environmental impact report, which the new law is based on, also calls for a ban on the use of slurry as a fertiliser, monitoring of livestock farming, closing down illegal irrigation networks, restricting fishing and developing protected areas in the sea itself.

The Murcia regional government’s Ministry of Agriculture is now studying the draft law.