GOMES has always loved animals, but when he arrived at Paróquia de Sant’Ana Gravatá as a priest in 2013, he found his calling — again.

At a church in Brazil, a homeless dog always joins the priest on the altar during mass, in a place of honour where all the congregation can see it. 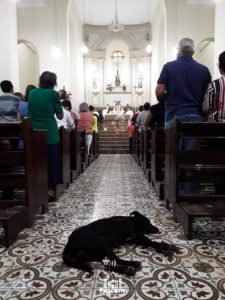 The intention behind this original placement of the stray dogs by Padre João Paulo de Araujo Gomesis in the church, is to aid them find a loving home to go to.

It’s a small action, but it has made a big difference for the forgotten dogs of Gravatá.

The idea or “vision” came to him when some volunteers approached him in order to sell cookies to aid a project with stray animals. Gomes revealed “I gave them time during masses for the advertising of the cookies and then I started to participate in the projects of this NGO.”

Gomes learned about all the abandoned animals living in difficult situations around the city. To help the dogs find homes, he began to welcome them into the church and make them part of his services.

But he didn’t stop there. Wanting to lead by example, he welcomed stray dogs into his own home and helped to nurse critically ill animals himself. 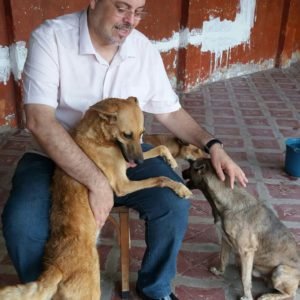 “I began to adopt some animals who had been mistreated … always with the support of volunteers,” Gomes said.

Gomes and the volunteers have placed feeders outside the church, where stray mongrels can go to eat and drink fresh water. And the doors of his church are always open for dogs in need of a rest.

“What I do is just a drop of water in the face of the magnitude of the problem,” Gomes said. “I wish I could welcome all the animals, but we work with many limitations. Everything I do depends on volunteers and volunteers who help me, so it’s not my merits but those people’s, too.”

Gomes’ good deeds have recently earned him a lot of attention on social media after a photo of him conducting mass with a stray dog by his side went viral.

“Caring for animals and nature as a whole is a great gesture of love for God, humanity and the planet,” he said. “We need to develop the perspective of compassion. Too much violence, too much aggression and accusation, diversity becomes the scene of war and struggle, and compassion is the only remedy.”

In Gomes’ eyes, the church should be a safe haven for everyone — animals included.