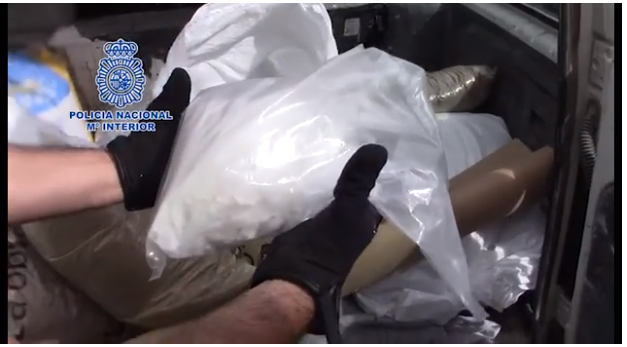 POLICE have found more than 100 kilos of crystal meths hidden beneath a load of rubble in a van.

WATCH: More than 100 kilos of crystal meths hidden beneath a load of rubble inside a van were found by police in Madrid.

National Police officers were deployed in a car park in the Campo de las Naciones area of Madrid as part of another investigation, when they noticed a man behaving suspiciously.

He had approached a van which was in a very poor condition. He then “showed a nervous attitude” according to police, checked his telephone on several occasions and then crouched in front of the vehicle to pick up the key, which was hidden on the left wheel.

As soon as he tried to remove the vehicle, the police approached and asked to see documentation.

As the man continued to show signs of nervousness the van was searched. Officers found several sacks of rubble, in which were hidden bags containing a crystalline substance and dust.

At that moment he was arrested and taken to the police station, where it was confirmed that the substance was methamphetamine, in the form known as crystal. In total 66 bags of the drug weighing 1.5 kilos each were discovered.