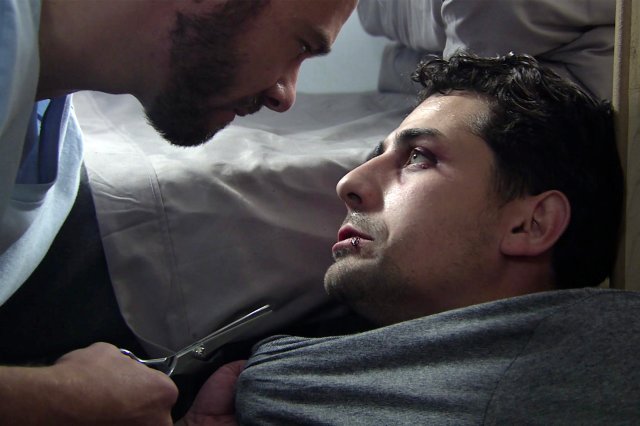 Prison riot scenes will air in Coronation Street as part of a David Platt storyline.

David Platt, who is doing time for money laundering after stealing from his grandmother Audrey Roberts, is to discover the man who raped him is also behind bars.

Josh Tucker, played by Ryan Clayton, is awaiting trial for another male rape.

When David reveals what Josh did to him, the other prisoners plan to start a riot, saying that it will be his chance to get his revenge.

Actor Jack Shepherd who plays David Platt revealed: “They say Josh needs teaching a lesson and in a riot, you can get away with anything, there’ll be no witnesses and they’ll bring Josh to him.”


Clayton said: “Josh’s safety is at risk and he can’t play the cards he used to play anymore.

“But he knows he still can use control over David and he does. He is full of bravado but the second he is alone with David you really see how scared and panicked he is.”

The prison riot will air on Monday, October 21.

Our founder Michel Euesden at the Euro Weekly News is an avid Corrie fan not missing an episode despite her long day working routine and commented “currently I’m trying to raise funds for the orphans in Malaga as well a running a newspaper for expats in Spain but I will relax for a little while when Corrie is on and look forward to the drama, my husband Steven will probably take the dogs for a walk whilst it’s on!”

British fears of catching COVID-19 on Spain’s Costa del Sol sees Man City Fans prefer to sit in a British bar with a 5 minute delay than live on...