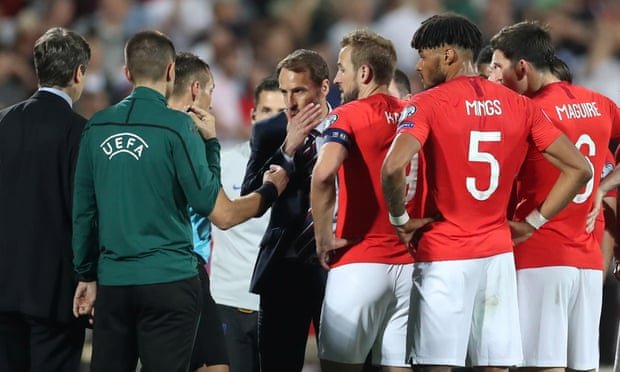 The ground was at least half empty, due to restrictions due to recent racist abuse issues but there were thousands of English fans belting out God Save The Queen with feeling.

A spectacular goal from Rashford on 7 minutes He ran down the wing before losing Pashov with a nice Cruyff turn on the left edge of the box. Then, from a tight angle, he smashed a rising shot that went through Iliev and into the net. Iliev might have done better, on reflection, but it was a vicious strike.
The next goal was made by Sterling on 20 minutes when he quickened the pace with a run infield from the right. He played a neat one-two on the edge of the area with Kane – who has been England’s most penetrative passer in recent games – and drove the ball across the face to give Barkley an open goal. At first, it looked it was offside, but on reflection, Barkley was behind Sterling when the ball was played. There was no VAR. also, it was not sure whether Sterling was trying to shoot or cross the ball to Barkley. Who cared? back of the net! 0-2.

The match was stopped on 27 minutes, because of racist abuse. The referee was spoken to by an official on the touchline. He now then spoke to Harry Kane.

There followed an announcement over the tannoy, which in itself was booed. The referee kept talking to Harry Kane. There were home fans, some of them in balaclavas, flicking V signs in the direction of the pitch.

The announcement was step one of Uefa’s protocol for dealing with racist chants. The second is another appeal over the PA system; if that fails, the referee should abandon the match.

England retaliated in the right way by scoring again Ross Barkley got his second goal with a deft header from Harry Kane’s right-wing cross. Kane has become quite the creator in recent times.


Most of the English players were being booed now, although it was aimed at Mings, Rashford and especially Sterling being jeered the most.

The game resumed, but Sterling was being booed once more. England answered in style Harry Kane, the assist king, gave an open goal to Raheem Sterling at the end of another nice team move making it 0-4.

That was the end of a surreal, dispiriting 45 minutes. England played well and scored four excellent goals, but the match was stopped twice because of racist abuse. One more stoppage and it should be abandoned according to UEFA regulations.

Gareth Southgate talked to Uefa officials at half-time. Ivelin Popov, the Bulgarian captain,  spent the interval appealing to the home fans. A number of the extremists left the ground after around half an hour, but there was still plenty of abuse after that.

England began the second half, and Raheem Sterling was immediately booed.

England scored five goals again on 68 minutes. Kane slid a nice pass through to Sterling, who finished with precision. Harry Kane’s through passing, both tonight and against the Czech Republic, had been devastating in fairness.

85th minute Harry Kane made a goal for well Harry Kane, Kane slipped the ball through the legs of the last man Terziev, ran through and sidefooted the ball past Iliev.

Callum Wilson hit the post with the last kick of the match. The final whistle was greeted by loud boos. But at least we heard the final whistle, which seemed unlikely when the game was halted twice in the first half because of racist abuse.

Sad night for football with the game despite the score, not the talking point this will continue to rumble on for sure.