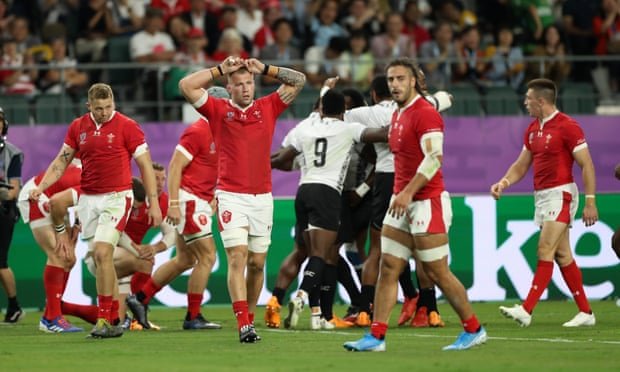 Following an intimidating performance of Fiji’s pre-match cibi, play got underway with, Ben Volavola doing the honours with the dropkick. It was gathered by Ross Moriarty, who burst towards the halfway line. From the ruck, Gareth Davies hoisted a box kick which was gathered by Kini Murimurivalu, the full-back.

It was a great play from Fiji, who surged through the centre making plenty of ground. The ball was offloaded to hooker Samuel Matavesi, who was eventually bundled out over the touchline. Wales won the lineout.

Fiji had a five-metre scrum and out on the right-wing, Josua Tuisova took a pass from scrum-half Frank Lomani. The winger was as strong as a charging bull as he went over in the corner, despite being tackled by three different Welshmen – Josh Navidi, Josh Adams and Dan Biggar – who were unable to stop him touching the ball down. The conversion was missed and Fiji lead 0-5 within 5 minutes of play.

A minute later saw a disallowed try as  Josh Navidi took a pass from George North and went over for Wales, but his try was disallowed for a knock-on by Hadleigh Parkes in the build-up.
Then just another minute later saw another disallowed try, Wales were caught dozing as Fiji bamboozled with a brilliant move that ended with scrum-half Frank Lomani touching down for a “try” that was disallowed for a forward pass from Semi Radradra. There was more drama as Wales hooker Ken Owens was sin-binned for a dangerous tackle in the build-up.
On the 11th minute, Fiji played the ball out wide through assorted various pairs of hands. It came to full-back Kini Murimurivalu, who surged forward and dived over the line despite having four  Welsh players around and in front of him. Wales were getting slaughtered and looked shell shocked. Once again, Ben Volavola missed the conversion to take the game to 0-10.
18 minutes saw a high cross-field kick to the corner from Dan Biggar. Under pressure from Ben Volavola, Josh Adams leapt high in the air and caught the ball before crashing over in the corner. Wales were off the mark. Dan Biggar put the ball over from the touchline to add the extras and pull the score back to 7-10 for some welsh relief.
Wales began atrociously but seemed to be getting their act together as Ken Owens returned from his spell in purgatory and they had their full complement of players again by the 20th minute.

Wales had three consecutive five-metre scrums by the 25th minute. They drove for the Fiji line, making ground before Ross Moriarty took the ball from his own feet and passed to Gareth Davies. He pinged the ball out to Josh Adams, who sprinted on to it and went over in the corner. He was tackled brilliantly as he went over and appeared to brush the touchline with his toe.

After lengthy deliberations which seemed fairly inconclusive, the referee and TMO decided that Adams had put a toe in touch and did not award the try. It was a wonderful tackle from Fiji scrum-half Frank Lomani to deny him.

There was more pressure from Wales deep in Fiji territory, but the defence was stout. Fiji knocked them back 10 or 15 metres, but their wing-forward Semi Kunatani was sin-binned for a late tackle on Dan Biggar after the Wales fly-half had released the ball.

30-minute mark Wales set up camp on their line. It was not good enough, however., unable to plough through the Fiji defence, Wales played the ball out wide from Williams to Davies and on to Josh Adams on the wing. He went over in the corner and Dan Biggar scored the touchdown with another fine kick from the touchline, Wales now led 14-10 pulling back the game and looking in control until yet another disallowed try for Fiji, Ben Volavola floated a pass out wide to full-back Murimurivalu, who charged over in the corner. His try was ruled out because the pass from his fly-half was forward.
Half time Wales 14-10 Fiji