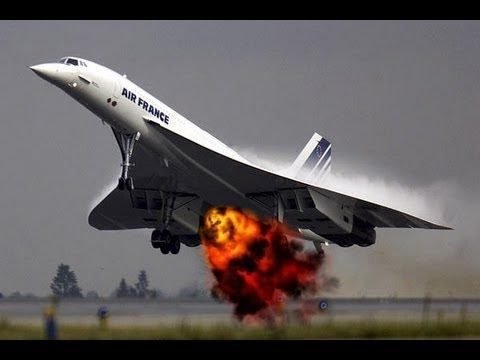 The RAES lecture by Concorde pilot John Hutchinson this week was fascinating and astonishing. He presented clear evidence that the French authorities, who conducted the crash investigation, covered up the true cause and tried to blame Continental airways engineers and design weaknesses in Concorde.
According to Hutchinson The truth is that Air France was totally to blame.
Firstly he said in his lecture their maintenance procedures were extremely poor. During an undercarriage service a spacer, that kept the wheels tracking straight, was not replaced. The spacer was later found on the shelf in the maintenance hangar.
The aircraft had done four flights with this defect prior to the crash so it wasn’t’t the prime cause, but as with all accidents there were a number of other errors that all added up. This may have been another successful flight had the crew not of had such a cavalier attitude to flight safety.
Hutchinson went on to say the first officer’s licence had expired making the flight illegal.
This wasn’t a factor in the crash but demonstrates the unprofessional attitude in Air France.
Hutchinson said the main fault lied with the Captain who overrode procedure and ordered the tanks to be filled to the brim instead of the normal 80%. He ordered more fuel than was required to be put in the aft tanks used for taxiing.
He also allowed 19 bags, that had not been weighed, to be loaded in the crafts hold.
All this made the aircraft over weight. Presumably due to the weight and balance being out of limits he requested to use the runway extension, even though it was officially out of use because it was being re-surfaced. He also elected to take off with an 8 kt tail wind.
The French investigations verdict was that the crash was caused by a metal strap falling off a Continental airways DC10 onto the runway which burst a tyre, punctured the Concordes fuel tank starting a fire.
What really happened said Hutchinson was that as the aircraft accelerated over the unprepared part of the runway it hit a ledge as it crossed onto the prepared surface at about 100kt.
This caused the wheels to track to the left as they had no spacer to constrain them. The tyres overheated and burst starting the fire. The aircraft slewed off the runway to the left, hit a runway light and the metal strap which carved a piece of tyre off which was then thrown up into the wing tank setting up a shock wave.
As the tank was full there was nowhere for it to go other than out through the top of the wing streaming fuel into the engine efflux.
The engine overheated but wasn’t on fire and was still producing power.
The flight engineer ignored normal procedure and shut the engine down.
As the aircraft was past V2 Hutchinson explained he should have allowed the aircraft to gain height before doing that. All this contributed to the aircraft crashing into a hotel killing all 109 on board and 4 people in the hotel.
Hutchinson revealed the death toll could have been a lot worse.
As the Concorde was careering off the runway it missed a fully loaded 747 waiting for permission to cross, by just 20 feet. On board that aircraft was the President of France and his wife.
In addition to that a British youth orchestra had planned to stay in the hotel. Had it not been for their ferry being delayed they would have checked in and certainly perished as well.
Hutchinson then lectured  what makes the French authorities actions even worse was that they obstructed the UKs AAIB investigation, not allowing full and timely access to the crash site and certain evidence.
The French prosecuted the Continental Airways engineers for manslaughter and they unfairly blamed design weaknesses in Concorde.
The engineers were later acquitted on appeal, and this is where much of the hidden evidence came to light.
After the trial the French barrister, who successfully defended the engineers, was mysteriously found dead but the French didn’t hold an inquest into that.
A disgraceful chain of events that eventually led to Air France, who wanted to see Concorde grounded, putting pressure on Airbus, who were the design authority for Concorde, to increase their charges to British Airways.
This was a deliberate act to make the aircraft too expensive to operate and resulted in an unjustifiable slur on the reputation of one of the greatest aircraft ever to fly.
The 400 audience at the RAF museum thanked John Hutchinson for revealing the truth and expressed their shame on the French for allowing this to happen.
John Hutchinson joined the Royal Air Force in 1955 and spent eight years in the service, flying the Avro Shackleton in Singapore and then as a Flying Instructor and Examiner on the Jet Provost. This was followed by three years in corporate aviation flying a variety of light single and twin engine aircraft.

He joined British Airways in 1966 as a co-pilot on the Boeing 707 and then went on to the Boeing 747. He gained his command on the VC10 in 1976. He joined the Concorde fleet in 1977 where he spent the next 15 years until retirement. During that time he became a Concorde Route Check Captain and a British Airways pilot selector.

Since retirement from British Airways in 1992, he has worked as a consultant to the United States High Speed Research Programme. He sits on an Air Safety committee of the Royal Aeronautical Society and advises as an Expert Witness in aviation related legal actions. He has lectured extensively all over the world to a wide variety of Companies, Universities, organisations and Aviation Museums. But his favourite has always been, and will remain, the great privilege of lecturing on cruise ships.

He is a Past Master of the Honourable Company of Air Pilots of London and is a Fellow of both the Royal Aeronautical Society and the Royal Institute of Navigation.

He has flown over 70 different aircraft types and has just decided to hang up his flying helmet after one of his friends managed to land his Auster Aiglet in a field of barley. His friend was unhurt!