One of the dismantled organisations provided stolen high-end, high-capacity vehicles to other criminal groups dedicated to drug trafficking. Hashish was introduced in large numbers in Malaga and later moved to other Spanish provinces and to France, Italy and the United Kingdom.

The investigation, known as Operation “Balbi” began in August of last year, when agents learned of the existence of a criminal organisation that was steeling high-end vehicles with a large cargo capacity, mainly 4×4, from car dealers and garages located in Valle del Guadalhorce.

This Moroccan criminal group had frequent contacts with other drug trafficking organisations based in the province of Malaga and in Gibraltar. The stolen vehicles were provided to these other groups for drug trafficking.

After several months of investigations and thanks to the information obtained on the other criminal groups, it has been possible to dismantle 6 organisations dedicated to drug trafficking.

One group dedicated to the theft of vehicles that were subsequently sold to drug trafficking organisations.

The second dismantled organisation is of Algerian origin dedicated to the transport of hashish from Spain to France using large cylinder capacity vehicles.

The third criminal group dismantled was composed of 4 people of British nationality dedicated to the transport of hashish to the United Kingdom.

The fourth organisation was based in Estepona. The fifth dismantled organisation provided logistical support to other criminal groups, providing housing infrastructure to hide drugs, stolen vehicles, as well as gasoline for the boats used.


Finally, a sixth criminal organisation, which composed of over 50 individuals, mainly of Spanish nationality, who was based in the towns of Manilva and Pinos Puente, has also been dismantled. This organisation used highly sophisticated methods and devices, encrypted communication systems and military weapons, with 15 firearms intervened, including a Kalashnikov AK47 assault rifle, 56 kg of hashish, 322 marijuana plants, 3 boats and 4 vehicles stolen, among other items. This group applied extreme violence to maintain internal discipline.

The investigation has been carried out by civil guards belonging to OCON-SUR and the Judicial Police Team of the Civil Guard of Coín, directed by the Court of Instruction No. 1 of Malaga and propelled by the Anti-Drug Prosecutor’s Office, with the collaboration of the police from the United Kingdom, France and Italy. 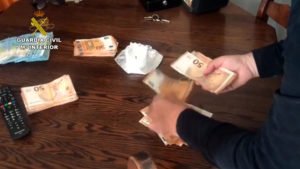