the art of publishing
More
Home News Breaking: The Civil Guard dismantles an international organisation dedicated to the traffic...

As officially stated by the Civil Guard today (Monday) the so-called “Ginés” clan has been completely dismantled. An organisation estimated to have introduced some 50,000 kilos of hashish into Europe per year.

This clan, led by two brothers, had partnered with an organisation of drug traffickers from the Campo de Gibraltar, who were in charge of piloting the speed boats.

During the operation, 15 houses were searched in the Seville towns of Coria del Río, Isla Mayor, Dos Hermanas and Carmona; in the Cadiz towns of La Línea, Algeciras and Sanlúcar de Barrameda and in the Malaga town of Manilva in Málaga. Four search warrants also took place on vessels located in Isla Mayor and Puebla del Río. 26 people have been arrested. 2,200 kilos of hashish confiscated, 3 boats, 9 vehicles, 273,000 euros in cash, 29 bottles of gasoline, 2 hand guns, 8 shot guns have been seized, several mobile phones and a drone, amongst other items.

The Investigation, known as the “Vegan Operation” began in August of last year, with a focus in the Seville towns of Puebla del Río and Isla Mayor. Large quantities of hashish, derived from North Africa, were transported in high-powered, rigid-hulled inflatable boat through the Guadalquivir river.

Last November, agents detected a lorry introducing a rigid-inflatable boat into a building in an industrial site in Puebla del Rio, with the aid of a tractor and overseen by tight security. A second high-powered vessel was spotted being transported from a warehouse in Puebla del Rio to Mairena del Alcor. The same boat was later intervened at sea by the Maritime Service of the Civil Guard.


In February the agents seized 2,200 kilos of hashish on the Guadalquivir River, at the height of the Seville town of Isla Mayor. The boat was intervened in the Isla Mayor industrial site, but the crew manage to flee in a vehicle, throwing a shotgun from the vehicle.

Today (Monday) the Civil Guard have officially stated the effective dismantle of one of the chief networks of a criminal organisation that is estimated to have transported about 50,000 kilos of hashish per year from North Africa to Europe. 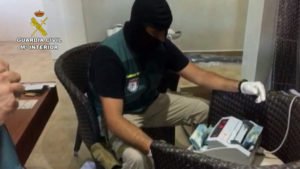