THE world famous, legendary Jacksons celebrated their 50th anniversary with an incredible and electrifying performance in Marbella.

Part of a world tour, Jermaine, Tito, Jackie and Marlon Jackson took to the stage at the Puente Romano Tennis Club and wowed the crowds with immortal hits such as Can You Feel It, I Want You Back and Blame It On The Boogie.

As well marking five decades since the history-making group was formed, the most recognisable brothers in music history also celebrated the life of Michael Jackson 10 years after his passing, with renditions of his best-selling hits like Rock With You and Wanna Be Startin’ Somethin’. 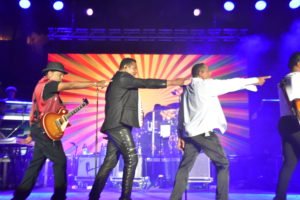 The Jacksons have five No 1 albums and 18 No 1 hits under their belts, and the packed audience was treated to an incredible evening as they belted out many of them complete with their infamous dance moves.

The night was rounded off with a meet and greet, offering members of the EWN team a privileged opportunity to rub shoulders with the group which has made music history.