FIREFIGHTERS have been sent to Mijas to put out a blaze which began this afternoon (Monday).

Video and pictures posted to social media showed the fire spreading across a hillside near to the Hipodromo in the La Cala Hills area.

Locals on social media said the emergency services had been called out. A video posted by Mijas firefighters on Facebook showed crews tackling the fire by a roadside.

Some residents said they could smell burning in the area and could see plumes of smoke above it.

Andalucia’s Plan INFOCA wildfire agency has yet to give details about the fire.

It comes as six wildfires have broken out in the Mijas area in the last month and a half alone, according to Plan INFOCA figures. 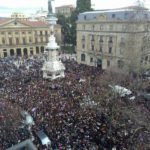