I’M really excited about having my own column in EWN and would like to tell you a bit about myself.

Being brought up in this wonderful place called Spain I discovered my passion for cooking at a young age practising along while watching ‘Ready Steady Cook’ at the age of seven and having my own small bag of goodies.

Moving to Spain at the age of five, I enjoyed the best of two worlds when it comes to life experience and culinary delights.

Initial interests led me not to the kitchen but to the golf course where I rose through the ranks to become a low handicap player and played for the Valencia team as a junior.


However I eventually returned back to the UK from Spain to pursue a career in the catering industry.

Working as a front of house manager for a pub chain in London I would find myself walking round Borough market taking in all the different ingredients from fresh truffles to the different fish, meat and vegetables available there.

I would cook for friends on my days off who were always full of praise and gave me the confidence to move onto my next chapter.


One day I saw an advert for contestants on MasterChef and decided to apply.

I had always watched the programme over the years and dreamed of being a contestant.

After a long process, along with 20,000 other hopefuls, and numerous interviews and auditions, I was officially confirmed as one of the final 70 contestants on the BBC 1 programme.

My dedication and hard work with an innate love of the craft, took me to the final heats in the programme and my cooking career was about to begin.

Taking time off after the show to travel the world and learn the different cultures and cuisines of Asia and Australia, and armed with years of experience and most importantly, my love of the craft, I returned to Spain.

I then opened my first restaurant The Vintage Cafe in the metropolitan resort of Albir, quickly becoming the taste of the town and number one on TripAdvisor as well as being voted the best restaurant in the area.

I now provide a unique private dining experience from high end, casual parties to corporate as a private chef in the comfort of your home from MasterChef dishes to paella, BBQs, canapés tailored to suit all budgets all over the Costa. 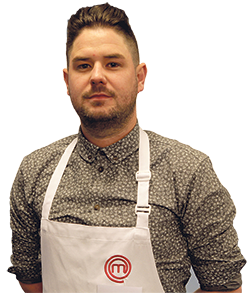 “The Euro Weekly News is proud to introduce our exclusive new columnist, successful restaurateur chef Dani Bowler, who will be sharing his passion for cooking with Costa Blanca North readers each week. The MasterChef contestant will also reveal his delicious and inspired recipes of choice, making it possible to recreate high end, tasty dishes in the comfort of your own home.

Add the bacon to a frying pan and cook on a low heat, cover with a plate pressing the bacon down so it keeps its shape and doesn’t curl up.

Cook until crisp on both sides, leave and set aside.

Place the apples into a pan with a drizzle of olive oil, knob of butter, Chinese five spice, and cook on a medium heat until soft and beginning to brown, then set aside.

In the same pan add the brown sugar until the sugar devolves and starts caramelising (do not burn) then add the apple mix back to the pan and mix well.

Transfer the mixture to a food processor and blend until a smooth puree. Place in the fridge to chill until ready to serve.

Pan fry the slices of black pudding in a little olive oil for 45 seconds on both sides or until crisp, leave to rest.

In the same pan (hot) add a little olive oil, add the scallops and cook over a high heat for one minute on both sides, or until golden brown all over and just cooked through.

Add a knob of butter and when melted, use to baste the scallops in until golden brown.

Place a tablespoon of the puree along the plate, add the black pudding slices then a tablespoon of puree topped with a scallop and finish with the crispy bacon on the top!

You will have some puree left over, it keeps for a week refrigerated and goes well with any pork dishes!