A HOLIDAYMAKER has expressed his disappointment with travel company TUI’s bacon ciabatta ordered on board a flight from Spain’s Alicante to the UK.

According to NottinghamshireLive, the man, known as Nile, from Worksop, accused TUI of serving him a bacon sandwich that failed to live up to the images on the brochure.

The man, via his Twitter account @nips118, stated that he had been in Benidorm for the last seven days and wanted “some proper nice food on the plane”. He decided to order a ciabatta with bacon and wrote “not the best would you agree”. 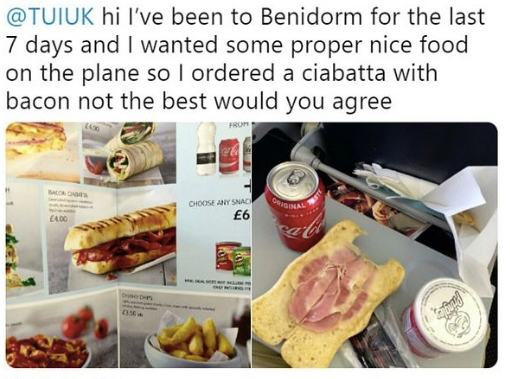 TUI responded online: “Sorry to hear that you’ve had cause to make a complaint about the meal you purchased on board with us.”

Woman ‘gagged and tied to a chair’ by workmates

UK
A woman 'gagged and tied to a chair' by workmates has lost a £500,000 compensation claim.DeeAnn Fitzpatrick was dismissed from Marine Scotland after she was...