THE truth will out

A NEWS item in The Weekender newspaper published on January 11 ironically headlined ‘A Matter of Facts’ broke the cardinal rule of court reporting – make sure what you write is what was actually said before the judge.

The article on page 4 – together with a ‘public announcement’ written by The Weekender owner Marco Baiardo on page 3 – took to task a statement from the owners of the Euro Weekly News. In it Michel and Steven Euesden said they personally and the Euro Weekly News Media Group had been ‘vindicated’  after a case brought against Mrs Euesden and her son Benjamin George Wickham had been thrown out of court.

The Weekender pointed out that Michel Euesden had not attended court, but stated that this was due to ‘ill health.’ It went on to say that the judge had not dismissed the case but had simply adjourned it due to the alleged illness, with a published letter from Baiardo’s lawyers apparently supporting the claim.

This is categorically not the truth, and has caused Mrs Euesden some distress. Despite multiple attempts by Mrs Euesden to gain clarification from Sun Lawyers as to why their version of events as noted in the letter was so different to that of EWN’s legal advisor Sebastian Gomez, no satisfactory answer has been received. Mr Gomez is adamant the published letter was incorrect as proven by the official court document.

He said: “I’m merely looking for the truth to come out.”


Well now it has. The court document printed on this page clearly states that the case has been dismissed – just as the Euro Weekly News reported at the time (December 18).

This is not the first time Baiardo has cast aspersions on the truthfulness of Mrs Euesden. In a series of Facebook posts and YouTube videos Baiardo has made claims about Mrs Euesden and her son Benjamin Wickham, to the extent of calling them liars.

He has also subjected them to highly personal abuse online, all the while attempting to take the moral high ground in what could be seen as a campaign against Mrs Euesden and Mr Wickham.

He has posted videos of him serving denuncias in various locations – so far these have come to nothing.

There is one reason for this – the courts have in each case so far presented, decided that there is no merit in continuing to waste court time.

IN a ‘public announcement’ Baiardo said in The Weekender newspaper: “If someone wants to make a public accusation then would you not at least back it up with some proof or show that legal action is in place?” Baiardo is confusing two actions. We have the legal proof that what we said was true – the court document could not be clearer. What Baiardo has done is put before the courts a series of claims apparently on the basis that if you sling enough mud some will stick, and then presented the cases as ‘proof’ of his accusations. 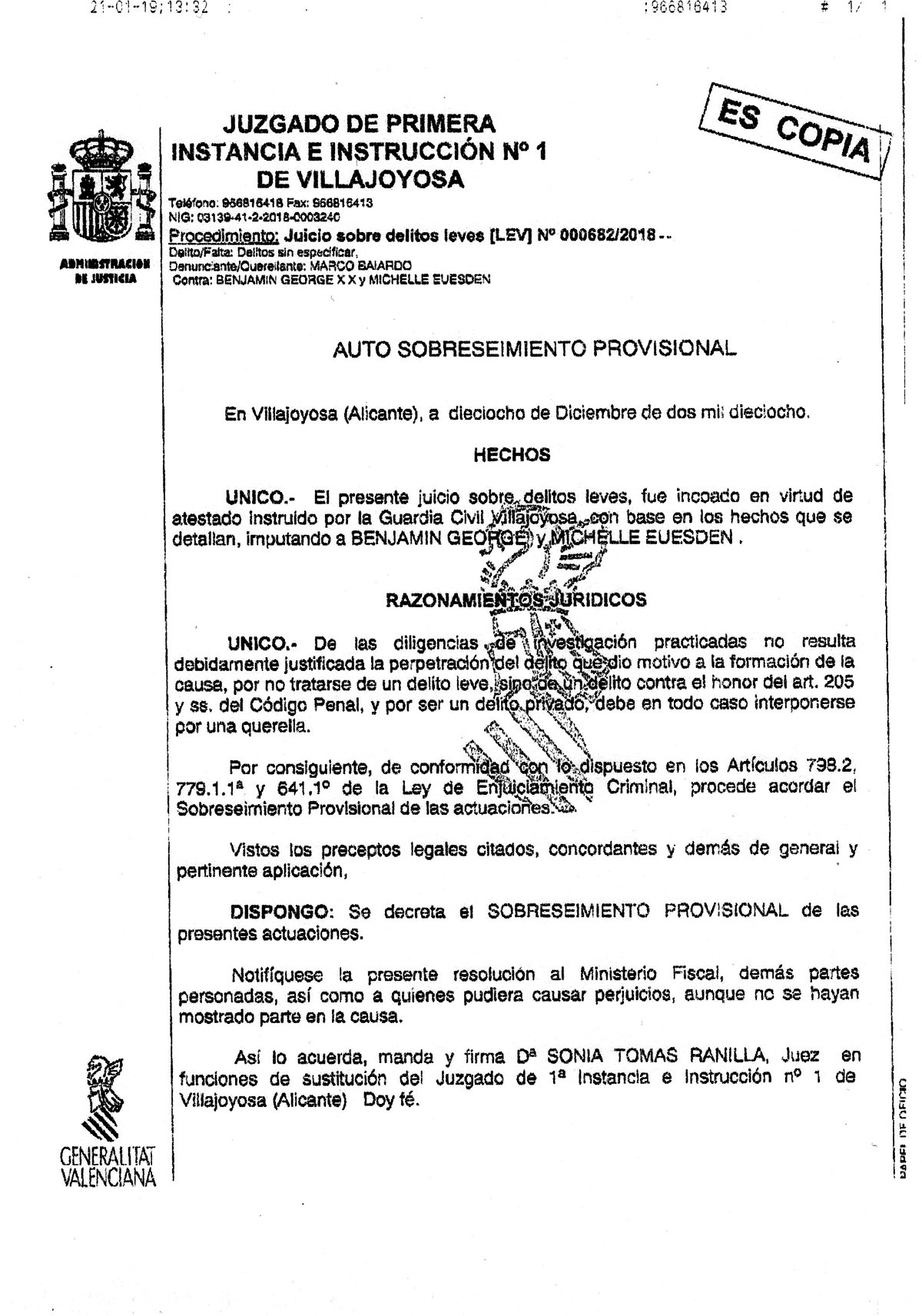 Against: Benjamin George and Michel Euesden

SOLELY – That this summary case hearing commenced due to the statements taken by Villajoyosa Guardia Civil, based on the facts which they were given, accusing  BENJAMIN GEORGE and MICHEL EUESDEN.

SOLELY – That from the investigation carried out it does not remain sufficiently clear that the crime which led to the opening of this case was perpetrated, because it is not a minor crime, but a crime against honour as according to article 205 and following of the Penal Code, and because as it is a private crime, a lawsuit should always be lodged.

Therefore, in agreement with what is said in Articles 798.2, 779.1.1ª and  641.1º of the Criminal Procedure Law, it is appropriate to Dismiss Without Prejudice this course of action.

Following the above mentioned legal precepts, which are in concordance, and all other general and pertinent precepts,

I ORDER: The DISMISSAL WITHOUT PREJUDICE of this course of action.

The Crown Prosecutor is notified of this resolution, as are the other appearing parties, as well as anyone who could suffer damages because of it, even if they did not take part in the case.

So what is it all about?

BAIARDO pursued a case against Mrs Euesden after she reproduced some remarks made by actor Patrick Murray – who played Mickey Pearce in the BBC sitcom Only Fools and Horses – about Mr Baiardo’s honesty.

He was invited to Spain to help fundraise for local charity Busy Bees. Baiardo, accompanied by Mr Murray  – to whom no blame is attached – encouraged well-wishers to put money in collection buckets.

According to Mr Murray’s account, it was later found that the seals had been broken. A criminal investigation was filed by Busy Bees in the Courts of Benidorm, but the case was dismissed as it couldn’t be proved. Mrs Euesden simply reproduced Mr Murray’s written remarks.

Despite bringing a large legal team Baiardo was unable to convince a judge in Villajoyosa to continue the action.

The judge therefore dismissed the case.

I HEREBY CERTIFY THAT: