PACMA, Spain’s Animalist Party Against Mistreatment of Animals, shared a distressing video yesterday (Thursday) of a man brutally mistreating a fox until its death.

In the video shared by PACMA, the man who is armed with a firearm discovers the fox hiding in some bushes in an unknown location in Spain.

The thug, who appears to be a hunter, is videoed kicking, punching and stomping on the animal until his last breath, the images show how he checks if the fox is still alive before celebrating its death.

The Animalist Party warns viewers of the highly distressing content of the video in a message shared via Twitter.

The message expresses PACMA’s views on animal violence, stating that ‘they are the only political animal party that fights against hunting’.

They also ask the public in a tweet to get in touch with the Guardia Civil if anyone recognises or can identify the individual in the video. 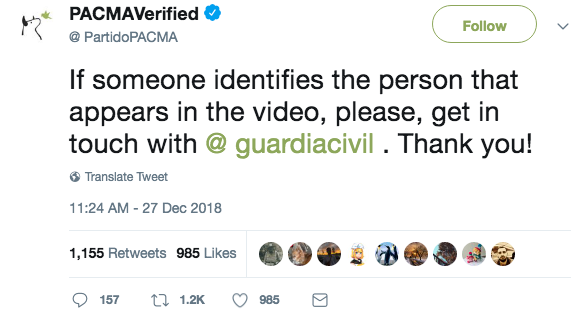