A SEARCH operation for the missing 73-year-old British man, who lived alongside a riverbed, and hasn’t been seen since last week’s flash floods in Malaga, Spain has proved fruitless today (Tuesday).

Guardia Civil officers, Local Police, Civil Protection teams and volunteers were joined by specialist search dogs but failed to find any trace of the missing Brit.

People were asked to assemble at the Los Tubos (Toblerone) bridge on the outskirts of the town at 11am.

More searches are planned and helpers are being sought to take part.

Volunteers are advised to wear long trousers, boots, waterproof jacket, take a sandwich and water. The Guardia Civil and Civil Protection will direct you to the search areas.

The co-ordination point is here:

There is a hope among local expats that Roger Hanks ‘may’ have moved to safety somewhere being aware that floods were on the way.

His bike hasn’t been found – so they are asking people on the Costa del Sol and inland areas to keep their eyes open for him.

They describe Roger as a very private man who lived in a ‘shack’ alongside the Rio Pereilas, near Coin in Malaga’s Guadalhorce Valley and often refused offers of help.

He hasn’t been seen since last Tuesday before the area was hit by severe flooding late in the day and in the early hours of the Wednesday morning.

Roger is described as around 1.7m (5ft 7in) tall but walks very badly with bandy legs and slightly bent over with medium to thin build.

His face is weather-worn with a prominent, hooked nose, few if any teeth and he has greyish hair.

He has a push bike with him most of the time.

He was last seen Tuesday, October 9 by the ‘Toblerone’ bridge. 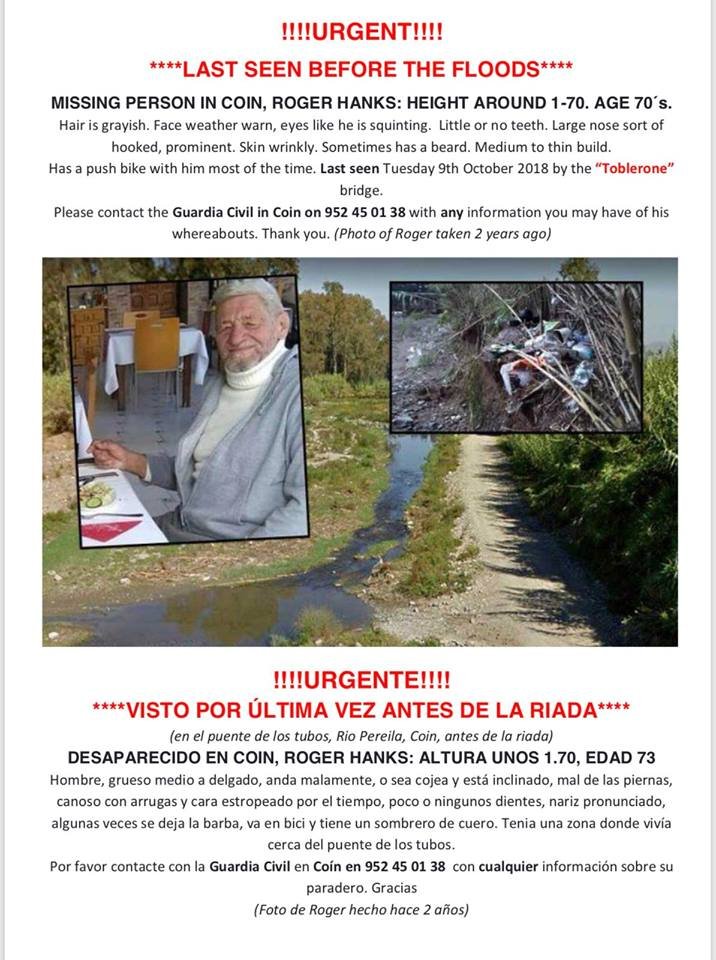