BATON-WEILDING riot police in Spain have been pelted with paint bags by pro-independence supporters in Barcelona today (Saturday) ahead of Monday’s anniversary of the 2017 Catalan independence referendum.

The protesters also threw projectiles at police and officers responded with baton attacks to keep them back.

Separatists had gathered to protest another march by Spanish police demanding better pay.

Earlier, Catalan Mossos D’Esquadra regional police officers had intervened to form a barrier when a separatist threw purple paint on a man who was part of the march of around 100 people in support of Spanish police.

Barcelona mayor Ada Colau pleaded for calm saying: “This city has always defended that everyone can exercise their rights to free speech.” 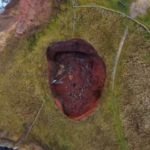