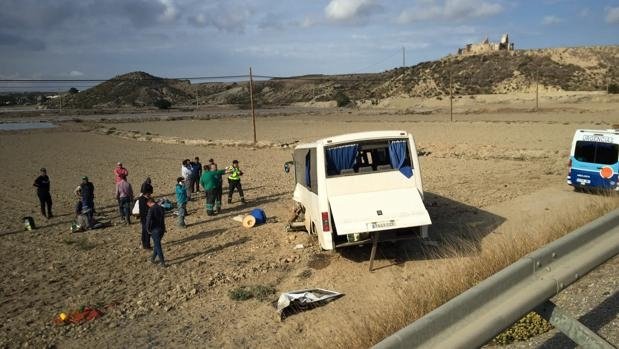 NINE people have been seriously injured after a minibus packed with farm employees collided with a car in Almeria.

The horror smash saw the bus plunge “three to four metres” down an embankment as it careered off the A-332 road between Cuevas del Almanzora and Aguilas, Murcia, medics said.

Initial reports suggest that the driver of the car, 30, was overtaking another vehicle when he slammed head-on into the bus – which was carrying 23 passengers – before spinning into a guard rail.

The motorist, who was travelling alone and suffered a suspected broken leg, had to be cut free of the wreckage by the fire brigade.

A total of 26 people were hurt, with 16 hospitalised after a helicopter and ambulances from Pulpi, Mojacar, Vera, Cuevas del Almanzora and Huercal-Overa attended the scene.

They were taken to La Inmaculada and Torrecardenas hospitals in Huercal-Overa and Almeria City, and Baza Hospital in Granada.