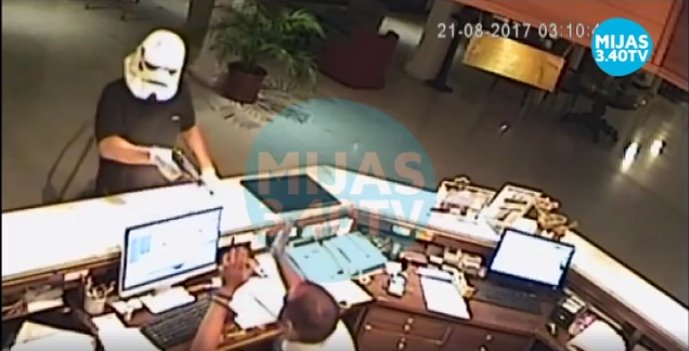 A 41-YEAR-OLD British expatriate has been held in Mijas on suspicion of robbing a hotel while dressed as a character from sci-fi movie franchise Star Wars.

The culprit was wearing an Imperial Storm Trooper mask as he entered the Mijas Pueblo hotel carrying a gun before stealing €1,500 in cash from reception and fleeing the scene.

It comes after police released CCTV footage of the incident, which has been widely shared on social media.

In the video, the helmet-clad man can be seen casually walking through the hotel’s reception before pointing a gun at the receptionist.

After putting the money into a small black bag, the thief initially leaves the scene but returns to destroy what appears to be the deskphone.

Hours earlier, there had been reports of an attempted robbery at a holiday home in the area by the same individual.

After probing videos and images of both events, Guardia Civil officers were able to arrest the unnamed Englishman and also found a loaded gun at his registered address.


The 41-year-old has reportedly been accused of two counts of alleged robbery, robbery with attempted violence and intimidation.

He has been imprisoned without bail pending trial.